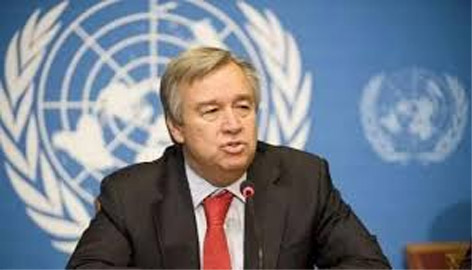 UNITED NATIONS, May 13: UN chief Antonio Guterres has extended the telecommuting arrangements at the world body’s headquarters through June 30 in the wake of the coronavirus pandemic and said the situation will continue to be reviewed to decide on a phased reopening of the premises.
Globally, the death toll due to COVID-19 has gone up to 287,158 with over four million infections reported so far. The US is the worst-affected country, according to Johns Hopkins University tally.
UN Secretary General’s spokesperson Stephane Dujarric said at the daily press briefing that Guterres has informed staff at the world body that after consulting with senior management in UN medical services, he is extending the telecommuting arrangements at the headquarters through June 30.
“These arrangements will continue to be reviewed. The Secretary General said that a plan is also being finalised for gradual and phased return to the building, whenever it is considered safe for us to do so,” Dujarric said, adding that the staff’s health and safety are the priorities guiding this process.
In April, the UN chief had said that telecommuting for all staff, diplomats and personnel at the UN headquarters, put in place due to COVID19, will continue till May 31. He had said that telecommuting arrangements would be constantly reviewed as subsequent extensions may be necessary.
Telecommuting was implemented in the UN headquarters with effect from March 16 till April 12. All UN staff was required to work from home unless their physical presence in the workplace was needed to carry out essential services.
The UN General Assembly is scheduled to hold elections for five non-permanent Security Council seats on June 17 but the 193-body is now looking at options on how to conduct the elections without having diplomats and envoys of all member states present in the UN General Assembly hall for the secret ballot.
President of the UN General Assembly Tijjani Muhammad-Bande is discussing options, including online voting, to conduct the UNSC elections, Muhamad-Bande’s spokesperson Reem Abaza has said.
Abaza had said that the options being prepared include elections requiring secret ballots where Member States can cast their votes at a specific venue, taking into account requirements of social distancing, or by electronic means.
Elections for the five non-permanent members of the 15-nation Council for the 2021-22 term were scheduled for June 17.
India is a candidate for a non-permanent seat in the elections this year and its victory is a given following the unanimous endorsement of its candidature by the 55-member Asia-Pacific grouping, including China and Pakistan.
Canada, Ireland and Norway are vying for two seats in the Western Europe and Other countries category, Mexico is the only candidate for the one Latin America and Caribbean seat and Kenya and Djibouti will contest the seat available for the African group.
The General Assembly is not holding meetings in person as UN staff and diplomats telecommute due to the pandemic. Resolutions are being adopted by the UN body through a silence procedure, under which if no Member State raises any objections to the draft within a specified time period, the President of the General Assembly will circulate a letter confirming adoption of the text. (PTI)