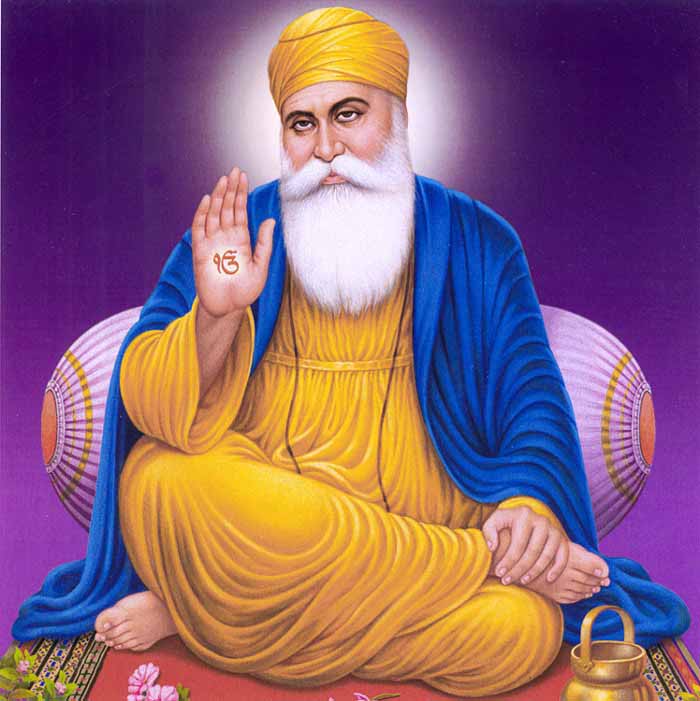 Inderjeet S.Bhatia “Prince”
Guru Nanak Ji, also referred to as Baba Nanak was the founder of Sikhism and is the first of ten Sikh Gurus. Before the Birth of Guru Nanak, the world was torn into many warring camps and society was caste-redden. Inequality prevailed in various sections of society. Low caste people used to be ill-treated by the so called high caste people. The low caste people were not allowed to visit religious places by the society. That is why Bhai Gurdas Ji described the birth of Guru Nanak Dev Ji in the following words:
Satguru Nanak Pargatya,
Mitti Dhundh Jag Chanan Hoya !
With the appearance of Guru Nanak Dev Ji, The mist of ignorance disappeared and there was a light of truth and justice everywhere just as was the rising sun the darkness is over.
Guru Nanak Dev Ji, right from his childhood, used to enjoy the company of holy men moving in the area on pilgrimage. Guru Ji used to participate in the religious discourses with these holy men. Guru Ji’s father, however, did not appreciate his son’s strong leaning towards religious discourses and he got Guru Ji married. Guru Ji’s sister’s husband was in service of the revenue department of Sultanpur. He arranged a job of managing stores for Guru Ji. Guru Ji used to give alms freely to the poor and needy. Guru Ji continued to participate in the religious discourses with the holy men as usual despite being in service. Some people felt jealous of Guru Ji’s growing popularity. They complained to Nawab of Sultanpur Lodhi that Guru Ji was distributing some of the official stocks of grains in his custody. Twice the stores were inspected but nothing was ever found short.
One day Guru Ji decided to declare the mission for which he had been sent to this world by GOD! One morning, Guru Ji went to nearby rivulet for bathing and returned only on 3rd day. The people including the Nawab of Sultanpur Lodhi were jubilant on finding Guru Ji back with them. At that time, Guru Ji declared his Ist formal sermon:
“Na oi Hindu, Na Musalmaan’
Guru Ji was entirely against caste system and said that all are equal and are blessed by one creator that is God.
Man is neither high nor low by his birth but his individuality depends upon his deeds. If one does good deeds, he/she is deemed to be good in the eyes on God.
Guruji appeared for the salvation of humanity. Guruji wrote, Japji Sahib which is said to be the basis of spiritualism. Guruji wrote about the Almighty as under:
“Ek Omkar
Sat Naam
Karta Purakh
Nirbhau Nirvair
Akal Moorat , Ajooni Sahib”
(There is but one God, the true one, the creator of day and night, without fear, without hate)
Guruji, in a bid to eradicate the distinctions between people of different caste, creed or religion inculcated a common mode of worship and a common social institution called “Sangat” and “Pangat” .The former meaning gathering of good and noble people and the latter signifying people sitting and eating together in the same row irrespective of their caste, creed or status. The lifestyle as advocated by Guru Nanak Dev Ji is based on three fundamental teachings, ‘Meditation on the holy ‘Naam’ of one GOD, earn one’s bread by honest and sincere labour and share one’s earning with those in need.
“Kirat Karna, Wand Chhakhna”. Guru Ji felt for the suffering womankind of his times. People used to consider women inferior to men. Guru Ji raised voice against this practice and placed the womankind on a high pedestal.
“Jo Kyo Manda Aakhiyaeen
Jis Jammay Raajan!”
“Why call a woman inferior who gives birth even to kings and all!”
Guruji considered the institution of marriage as sacred tie, essential for the progress of mankind. Guruji also criticised the practice of ethical values of daily life such as justice, truth honesty, humility, fearlessness and gratitude which made a man true human being.
Five teachings of Guru Nanak Devi Ji:-
1. There is only one God who is the supreme truth and ultimate reality. He knows no fear and does not have any enemies.
2. Guruji asked his followers to shun 5 evils that is Ego, Anger, Greed, Attachment and Lust. Any of these five evils makes life miserable.
“Wand Chhakho” :- sharing with others, helping those with less or in need.
“Kirat Karo” :- work diligently. Earn your livelihood honestly without exploitation or fraud.
“Naam Japo” :- meditate on God’s name to control five evils and to live a contented life.
Guru Ji had travelled far and wide to spread the word of Gurbaani and covered most of India, present day Pakistan, Bangladesh, Sri Lanka, Tibet, Nepal, Bhutan, South, West China, Afghanistan and Iran. (The details of Guru Ji’s travel are found in 4 udasis). Seeing Guru Ji’s teachings, people from different communities became his followers.
Guru Ji left for his heavenly abode on 22nd Sept 1539 at the age of 70 in Kartarpur Sahib, Punjab (now in Pakistan).
feedbackexcelsior@gmail.com