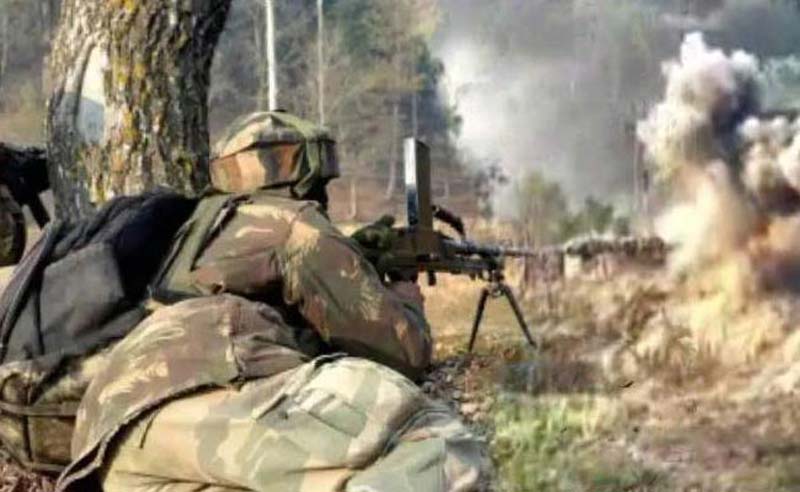 JAMMU, Apr 6: The gun battle at Jumgund area of North Kashmir’s Kupwara district in which five militants were killed and equal number of Special Forces of Army were martyred was virtual point blank.
An army official said that it was a group of 12 militants but only five managed to sneak in while seven others fled back to the Pakistan occupied Kashmir (PoK). “It was the biggest incursion attempt since the snow has begun to melt”, he said.
The official said that the militants had infiltrated across the LoC last week. “Movement had been noticed near fence on April 1 from drone imagery. This was confirmed on the ground with footprints in the snow not far from the LoC. On Wednesday itself, search parties comprising infantry troops were launched. On Wednesday afternoon, there was a brief exchange of fire after which the militants left their position abandoning some of their bags, containing ammunition. The area was quickly cordoned off”, he said.
At dawn on April 2, troops once again established contact with the militants at about 4.30 pm. “The militants returned heavy fire before slipping off one by one from a ledge. The chase continued, with contact established twice more on April 3 and 4”, he said.
The official said that on April 4, two squads of the 4 Para Special Forces were deployed for a forward staging to the nearest battalion headquarters, and from there to Rangdoori, Guguldara and Teen Behak areas of Jumgund. “They were dropped near the encounter site from choppers as the area remains cut off in winter due to heavy snowfall”, he said.
The official that intermittent firing continued from two locations, and then narrowed down to just one location. “Tracking movements across two days, it became clear that the militants had been cornered into a part of Kupwara’s dense Zurhama forest, not far from the Jumgund village”, he said.
He added that the Special Forces tracked them through their footsteps in the snow. “Tracking footsteps in the snow, one of the 4 Para squads in the snow tragically realised too late that they were on a cornice. The snow broke under their weight and they fell into a frozen mountain stream, right into where the militants were hiding. This led to a close quarter fight in the most literal sense”, he said.
“All the five Special Forces personnel who fell into the nallah just in front of hiding militants killed all of them in a close quarter fight but entire squad of Special Forces was martyred. They have been identified as Subedar Sanjeev Kumar and Paratrooper Bal Krishan from Himachal Pradesh, Havildar Davendra Singh and Paratrooper Amit Kumar from Uttarakhand, and Paratrooper Chhatrapal Singh from Rajasthan”, the officer said.
“Two soldiers succumbed to their injuries on Sunday evening after being airlifted to Srinagar’s Army hospital. The remains of the other 3 Commandos and the militants were found within just two meters of each other”, he said.
“As luck would have it, where they fell, the militants were sitting right there. This led to a firefight at virtually point blank range. I have to give it to the training standards of the Special Forces. Inspite of their fall, they killed all the five militants”, he said.