E-Paper
Home Weekly specials bollywood “Gulaab Gang”: Madhuri is back with a Bang! 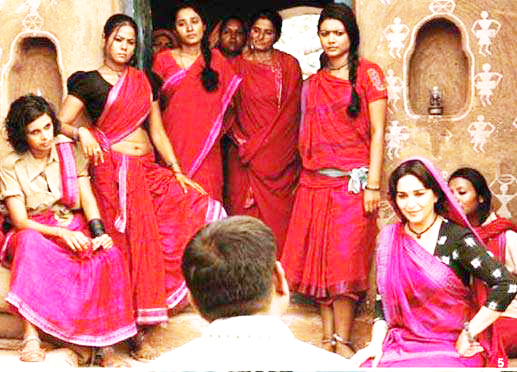 Produced by Anubhav Sinha and directed by Soumik Sen, “Gulaab Gang” starring Madhuri Dixit and Juhi Chawla in key roles is the story of two strong-willed women on the opposite side of the fence. Madhuri Dixit plays ‘Rajjo’, a crusader against domestic violence and other crimes being committed on women by this male dominated society. “Rajjo” has formed a gang called “Gulaab-Gang” which does not hesitate to use arms to make men fall in line she also wants to start a school but faces numerous obstacles, the biggest of which is from Sumitra Devi ( played by Juhi Chawla) a corrupt politician. “People will be surprised to see Juhi as the villain,” says Soumik Sen who describes this film as Madhuri’s “Singham.”
“Gulaab Gang” is reportedly inspired by the “Gulaabi Gang” of Sampat Pal, a real life vigilante whom viewers have seen in “BIG BOSS” some time ago. “Gulaabis” (women wearing pink saaris and members of Sampat Pal’s Gulaabi Gang) used to visit abusive husbands and beat them with “laathis” (wooden bamboos) unless wives in 2008. They once stormed electricity office in Banda distt; and forced officials to turn back the power they cut in order to extract Bribes from the villagers. They also stopped child marriages and protested against social evils like dowry and female illiteracy. The group which the Indian media portray positively was reported to have 20000 members as of 2008.
Sampat Pal’s “Gulaabi Gang” was the subject of 2010 Hollywood movie “Pink Saris” by Kim Longinotto and 2012 documentary film “Gulaabi Gang” by Nishtha Jain. Initially it was reported that Madhuri and Juhi starrer “Gulaab Gang” is based on Sampat Pal’s life but the director denies this saying that he is obliged to her work but this move is not based on her life.
“Of course our film revolves around a group of women who wear pink sarees and fight domestic violence. But then there is no other similarity!” says Soumik Sen. Madhuri Dixit has performed a lot of tough actuion scenes for this film. She even practised the fight scenes for a week. According to Kanishk Sharma, the fight choreographer of “Gulaab Gang,” “Madhuri has a photographic memory. She is a dancer and fighting too involves rhythm. So it became easy to explain the fight steps to her. Of course, there is always an element of risk. We had suggested a body double but she refused says Kanishk Sharma.
In the words of Madhuri Dixit, “you need to stay cool during such scenes and keep your mind alert because a mistake can result in injury.” She says her dance training comes in handy. “I memorise the steps. If you are a dancer, you are a graceful fighter as well!”
Film is in its final stage of production / post-production work and will be released very soon.
Madhuri’s come back film which was a dance oriented emotional drama (Aaja Nach Le!) was a total failure at the box-office. She has pinned high hopes on this action oriented saga of result of women against atrocities and crime committed on them by male-dominated society. Hope she would be lucky this time!!
Satyagraha
Filmmaker Parkash Jha’s “Satyagraha” starring Amitabh, Ajay Devgun, Kareena Kapoor, Arjun Rampal and Manoj Bajpai in lead roles is all set to hit silver screens across the country on August 30, 2013. Film inspired by noted social activist Anna Hazare’s war against corruption and corrupt forces, has Amitabh Bachchan playing the central role in this movie. Helping him in his noble cause are Ajay Devgun and Kareena Kapoor, Manoj Vajpayee plays a corrupt politician. Recently an item number performed by model-actor Natasa Stankovic which goes like, “Aiyo Ji Hamri Atariya Mein” was added in the film.
According to filmmaker “such songs contribute to some special moments and sensibilities. They help the story too. In “Satyagraha” the item song creates the ambience of affluence and the bonhomie of corrupt people. These item songs do entertain and entertainment happens to be the most important part of film-making. At the same time, when used cleverly they can also be meaningful.
Parkash Jha’s “Gangajal” (2003) had an item song performed by Manyata Dutt, TV star Barkha Bisht had performed an item number for Jha’s “Rajneeti” (2010).