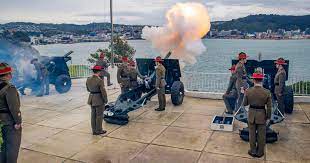 Wellington, June 3:Queen Elizabeth II once asked why the New Zealand men’s cricket team had picked a 17-year-old for the starting lineup.
“Is this a case of absolute confidence or sheer desperation?” the British monarch wondered, Don McKinnon recalled Friday.
McKinnon, who was secretary-general of the Commonwealth countries at the time, said it showed the queen’s broad interests, whether it be in horses, sports or the stories of the thousands of people she met.
McKinnon made the comments during the keynote speech at a New Zealand church service to mark Elizabeth’s 70 years on the throne. The queen’s Platinum Jubilee is being celebrated over several days in Britain and more than 50 other Commonwealth countries.
McKinnon also recalled the time he tumbled off one of the queen’s horses and limped into a meeting with her soon after. He said he was very pleased with her response, which he would have expected from any New Zealand farmer: “How’s the horse?”
McKinnon recalled Elizabeth’s warm personality, the way she smiled vividly with her eyes, and her serenity considering the havoc going on around her.
Elizabeth has visited New Zealand 10 times during her reign. On her first trip in 1953-54 she laid the foundation stone for the Wellington Cathedral of St. Paul, where Friday’s service took place.
“For us, on this side of the world so far away, we will always know her as someone who enjoyed coming to New Zealand, who enjoyed meeting New Zealanders,” McKinnon said. “Seventy years of grit, grace and glory.”
New Zealand’s Prime Minister Jacinda Ardern also spoke briefly at the service, saying that people were marking the jubilee milestone with a sense of “awe, reverence and gratitude.”
New Zealand also celebrated by lighting a beacon and having the army fire a 21-gun salute. The British monarch remains New Zealand’s official head of state, although the role is now considered primarily ceremonial.
For the record, the young cricketer, Daniel Vettori, turned 18 just before playing his first test match for New Zealand vs. England in 1997, breaking the record for the youngest player to make the squad. He would go on to become one of the nation’s most successful all-round players. (AP)