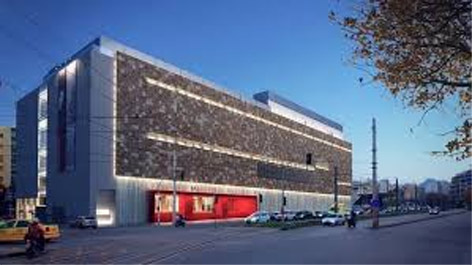 Athens, Feb 25:Greece’s National Museum of Contemporary Art (EMST) in central Athens is now open to the public with its permanent collection on display, ready to welcome Greek and foreign visitors, officials announced on Monday.

It took 20 years after EMST first operated in 2000 at the old Fix brewery for the museum to become fully operational in a renovated building with the necessary means to fulfill its role – promoting contemporary culture in Greece, Culture Minister Lina Mendoni told a press briefing on Monday.

The museum’s permanent collection consists of 172 works by 78 Greek and international artists.

Among its most important acquisitions are works by artists such as Marina Abramovic, Ilya Kabakov, Costas Tsoclis, Jannis Kounellis, Costas Varotsos etc.

To celebrate the official launch, the museum will offer free entrance for visitors from Feb. 28 and during March, it was announced.

“We managed to materialize the project today shortly before the expiry of the deadline set by contracts,” said EMST’s President of Board of Directors Giorgos Papanastasiou.

The entire renovation project of the building which was constructed in the 50s to house a brewery cost more than 44 million euros, Mendoni said.

The Fix building, designed by Greek architect Takis Zenetos, is considered a fine example of post-war modernism in industrial architecture in Greece. It was completed in 1961 and abandoned in 1982.

Until the main part of renovation work was completed in 2014, the museum was hosted in various venues across Athens, including the Athens Concert Hall and the Athens Conservatory, organizing periodic exhibitions and events.

Once it returned to its permanent home, preparations continued so that EMST becomes fully operational this year. (1 euro= 1.09 U.S. dollars) (AGENCIES)