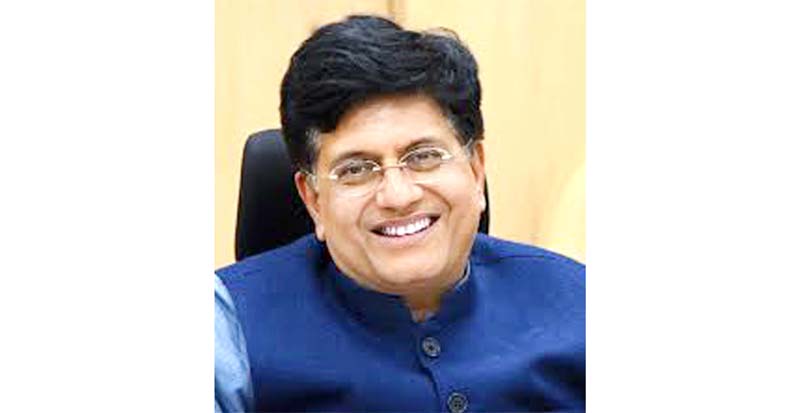 GST issues to be taken up with Council, Ministry

Sanjeev Pargal
JAMMU, Dec 15: In a significant decision aimed at further promotion of tourism in the newly created Union Territory of Jammu and Kashmir and boost inter-State rail connectivity, Railways Minister Piyush Goyal today reportedly agreed to run regular train serves on Jammu-Amritsar-Chandigarh route, which was also a long pending demand of the local people as, hitherto, Katra-Chandigarh train runs twice a week.
Goyal, who was on a day’s visit to Jammu, his first after J&K became a Union Territory on October 31, reviewed progress of Udhampur Srinagar Baramulla Railway Line (USBRL) and directed top brass of the Railways to ensure that the project is completed at the earliest.
Official sources told the Excelsior that Goyal, who is also the Minister for Industries and Commerce, in his meeting with top officials of the Industries here agreed to the people’s long pending demand for regular train service between Jammu-Amritsar-Chandigarh, where presently train runs just twice a week causing enormous inconvenience to the people travelling on the route who had to pay heft amount to private bus operators as well as the tourists desirous of visiting Jammu and Kashmir especially the holy cave shrine of Mata Vaishno Devi Ji.
The demand for regular train between Jammu and Chandigarh was not only confined to Jammu and Kashmir but the Union Territory of Chandigarh as well as the people had to either travel to Ambala to take train for Jammu or ride the buses.
Goyal was also reported to have agreed to the proposal for bringing more clarity in guidelines with respect to Service Sector in the ‘Industrial Scheme-2017’.
Certain clarifications had been sought by the Industrial Department as well as the industrialists regarding Service Sector in the ‘Industrial Scheme-2017’, a proposal to which the Union Minister agreed.
Goyal announced setting up of one ‘Technology Park’ each in Jammu and Kashmir divisions.
The ‘Technology Park’ will have facilities like ETP, Labs, Water Treatment Plan and will be set up in the Industrial Estates. The Industry and Commerce Department of the Union Territory of Jammu and Kashmir will submit a proposal to Goyal’s Ministry for setting up of the Technology Parks, sources said.
The Union Minister agreed that all issues pertaining to Goods and Services Tax (GST) will be taken up with the GST Council and the Union Finance Ministry. This was also pending demand of the traders and industrialists and had been projected before the Industries and Commerce Department.
Goyal reportedly said that Central Public Sector Undertakings (PSUs) can take a lead and set up industry in Jammu and Kashmir to serve as ‘Mother Industry’.
“Central PSUs can be requested to hold meetings and conferences in Jammu and Kashmir to boost the hospitality sector during lean season,’’ the Union Minister is reported to have said, adding that sale counters of handicrafts and handloom at all important locations across the country to give boost to Jammu and Kashmir traders, will be set up.
Sources said Goyal also reviewed progress of work on Udhampur Srinagar Baramulla Rail Line project, which has missed several deadlines in the past.
Work was now on between Katra and Banihal and the completion will link the Kashmir valley with rest of India by train.
Ever since its launch, the project has faced series of hurdles beyond Katra especially in construction of several bridges including the highest railway bridge over river Chenab. Late Prime Minister Atal Behari Vajpayee had first set 2007 deadline for taking the train to the Kashmir valley.
Presently, trains operate up to Katra, the holy town and base camp of Shri Mata Vaishno Devi Ji cave shrine, from Jammu side and Banihal from Baramulla in the Kashmir valley. The rail link is missing between Katra and Banihal.
Sources said Goyal was reported to have directed top officials of the Railways to ensure early completion of rail link between Katra and Banihal.
In November this year, Prime Minister Narendra Modi had also reviewed progress of work on Udhampur Srinagar Baramulla Rail Line and directed for its completion next year. However, according to sources, in view of construction of several bridges, taking train to Srinagar from rest of the country next year will be a tough task.
Earlier in the morning, the Railways Minister visited holy cave shrine of Mata Vaishno Devi Ji and paid obeisance to the Goddess.
He returned to the Union capital in the evening.