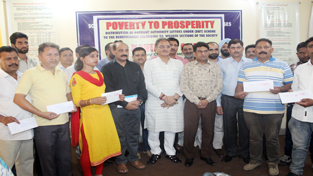 Excelsior Correspondent
JAMMU, June 1: Deputy Chief Minister Kavinder Gupta today said the State Government is committed to uplift the socio-economic status of economically weaker section of the society. He said inclusive and equitable development of the State is the priority of the Government.
Deputy Chief Minister was addressing a gathering after distributing Payment Authority Letters(PALs) worth Rs 15.97 lakh among the beneficiaries of SC, ST and Backward Classes under different State and Centrally sponsored schemes here at a function   organized by Jammu and Kashmir Scheduled Castes, Scheduled Tribes and Backward Classes Development Corporation Limited.
Also present were Vice Chairman of the Corporation Balbir Ram Rattan and other senior functionaries of the Corporation.
The Deputy Chief Minister said that the main objective of the scheme is to provide easy subsidized financial assistance to educated unemployed youth for starting their own enterprises in manufacturing, business and service and trade sectors. He urged the unemployed youth to take benefit of such schemes for starting their own ventures.
Gupta said that Government is well aware of the issues of the common masses especially that of, unemployed youths and weaker sections. He said steps are being taken for effective implementation of various welfare schemes so that genuine people are benefitted from these schemes.
Gupta lauded the role of the Corporation for its consistent efforts to improve the lives of disadvantaged people in the state by on-point implementation of welfare schemes launched by the government. “The corporation is doing yeoman’s service towards welfare and development of the underprivileged segments of the society”, he asserted.
He called upon the Corporation authorities to give wide publicity to the welfare schemes available for the targeted group and cover each areas of the State.
He hoped that the Corporation will continue its noble activities to mitigate the sufferings of weaker sections, disabled persons and others.
The beneficiaries provided assistance under   Scheduled Caste category were Krishan Lal, Dev Raj, Pawan Kumar, Avtar Krishan, Shamshar Kumar, Raghbir Lal, Shiv Om Nath, Gulshan Kumar and Parveen Kumar, besides Renu Verma from BC category.