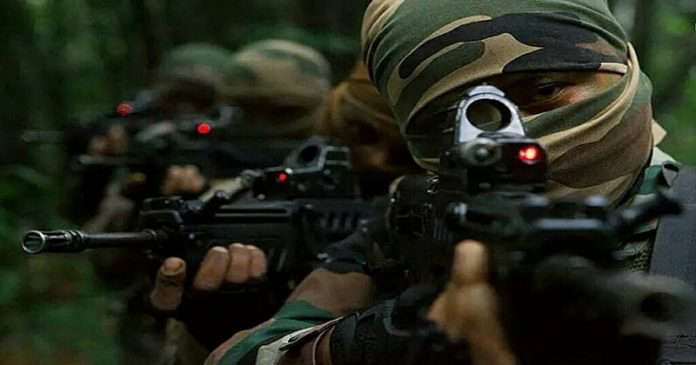 Will strike even inside enemy territory
Commandos will be drawn from all 3 Forces
Sanjeev Pargal
JAMMU, Dec 5: The Government is contemplating to set up 250-member strong special ‘Surgical Strike Force’ to carry out operations deep inside Pakistan’s territory to target launching pads of the militants across the Line of Control (LoC) in Jammu and Kashmir and neutralize infiltration attempts well before the militants cross the LoC and for conducting “certain extraordinary operations” whenever required.
“All members of the `Surgical Strike Force’ will be well trained commandos of three armed forces including Army, Indian Air Force (IAF) and Navy,” official sources told the Excelsior and said the `Special Force’ could come up at the very earliest especially in view of surge in sniper attacks by Pakistan army on the Indian soldiers in which number of soldiers have either attained martyrdom or were injured.
The ‘Surgical Strike Force’, according to sources, will conduct Intelligence based operations to thwart enemy’s plans like BAT (Border Action Team) strikes, sniper attacks, infiltration attempts by the trained militants and other such nefarious activities on the LoC under exceptional circumstances only by the Pakistan army and its supported trained militants.
All day-to-day operations and activities on the LoC will continue to be undertaken by the troops deployed there, sources said.
The ‘Surgical Strike Force’ will have some members, who will act as ‘Policy Planning Group’ while others will execute the operation, sources said, adding that raising of such a Force had become necessity in view of increase activities of the militants close to LoC on Pakistan side amid reports that the militants could make infiltration attempts even during the winter by trekking the mountains and making routes through the passes.
“The Special Strike Force’ will be fully capable of conducting surprise precision strikes deep inside enemy territory, hitting the targets, inflicting maximum damage in the shortest possible time and leave the battle area swiftly, which will be similar to the operation carried out by the country’s Special Forces on seven terrorist launch pads across the Line of Control in Jammu and Kashmir on September 30, 2016 in the aftermath of terror attack on Uri Army camp.
In the surgical strikes, Indian Army had successfully targeted the militant camps and Pakistan army installations, which had been sheltering the militants before their infiltration into Jammu and Kashmir and eliminated more than 50 militants and destroyed several camps before returning successfully.
Sources said the Government was of the view that the `Special Strike Force’ with enhanced capabilities, having best from all the three armed forces will be able to hit Pakistani targets successfully well before they carry out any kind of BAT strikes or sniper attacks and aid infiltration attempts of the militants into this side.
However, they added, that normal operations of the Army on the LoC will not be hampered with the raising of `Surgical Strike Force’, all of which will continue to be undertaken by the troops deployed on the LoC and the `Special Force’ will act only if “extraordinary situation warrants” for any kind of “major action”.
Sources said the battle-hardened soldiers whose skills are comparable to the US Navy Seals can operate in different terrain, from jungles and mountains to maritime environment and they will be well equipped to take up any kind of operations across the LoC within the limited area as was done during September 2016 surgical strikes.
The new unit will come under the direct control of the Army chief, sources said.
The soldiers in the attack unit, apart from having top fighting skills, will know specialized field craft such as reading hi-tech maps and coordinating with air support, which the unit will eventually get. The support group will have soldiers who have local knowledge of the target area and can provide intelligence inputs to the assault unit.
Sources said that the new Force will be a cohesive unit.
According to sources, the `Special Strike Force’ will also act as a “pressure group” for the Pakistan army and they will be forced to keep the militants away from the launching pads set up by them close to the LoC as they will always be in fear that the militants could be targeted by the Special Forces.
Presently, large number of militants were camping at launch pads on Pakistan side of the LoC across Jammu and Kashmir waiting for an opportunity to infiltrate into this side. However, alert troops of the Indian Army haven’t allowed the militants’ plans to succeed.