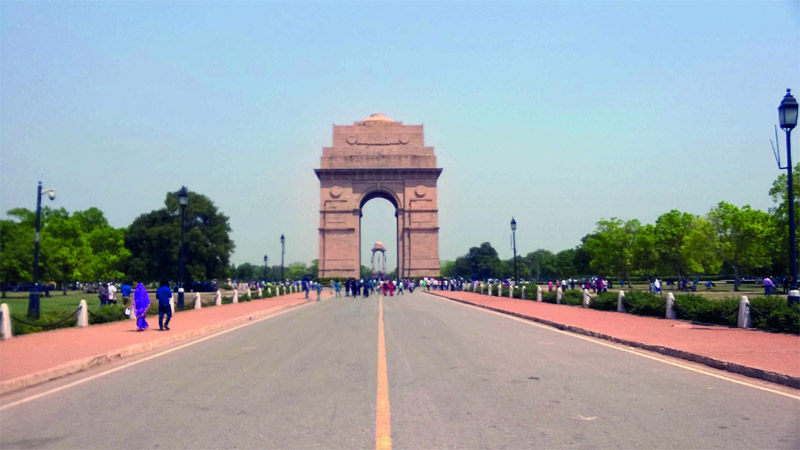 NEW DELHI, Sept 5: The Centre has decided to rename Rajpath and Centre Vista lawns stretching from the Rashtrapati Bhavan to India Gate here as ‘Kartavya Path’, official sources said today.
On September 8 evening, Prime Minister Narendra Modi will inaugurate the entire stretch, which has been renovated under his Government’s ambitious Central Vista redevelopment project.
The New Delhi Municipal Council (NDMC) has convened a special meeting on September 7 and the proposal will be placed before it. “The entire road and area from the Netaji statue at India Gate to the Rashtrapati Bhavan will be known as Kartavyapath,” sources said.
Rajpath was known as Kingsway during British Rule.
In his Independence Day speech this year, the Prime Minister stressed the abolition of symbols that reflect the colonial mindset.
The Prime Minister has stressed on the importance of everyone fulfilling their duties in the 25 years leading to 2047 when India will be celebrating 100 years of Independence. Both these factors can be seen behind the name ‘Kartavya Path’, sources said, adding “this is also a message to the ruling class that the era of rulers and subjects is over”.
Going by the ethos of the Modi Government to make nomenclatures more people-centric, the name of the road on which the prime minister’s residence is located was changed from Race Course Road to Lok Kalyan Marg in 2015, they added.
In 2015, Aurangzeb Road was renamed A P J Abdul Kalam Road. In 2017, Dalhousie Road was renamed Dara Shikoh Road. Also, Teen Murti Teen Murti Chowk was changed to Teen Murti Haifa Chowk in 2018. There have been several proposals to rename Akbar Road, but nothing has been done yet.
The redevelopment project of the Central Vista — the nation’s power corridor — also envisages a new triangular Parliament building, a common Central secretariat, a new residence of the Prime Minister, a Prime Minister’s office, and a new vice-president’s enclave.
The revamped Central Vista Avenue along the Rajpath will have state-wise food stalls, red granite walkways with greenery all around, vending zones, parking lots and round-the-clock security. But people would miss only one thing — food will not be allowed on the lawns from India Gate to Man Singh Road.
The stretch will open for the public after 20 months. On the day of the inauguration, visitors will not be allowed on the stretch from the India Gate to Man Singh Road, but they can use the remaining part. From September 9, the entire stretch will be thrown open to the public.
The Central Public Works Department (CPWD), an executing agency of the project, has set up five vending zones where 40 vendors each will be allowed and according to the plan, they will not be allowed to sell their items to visitors in the garden area.
A senior official said there would be two blocks near the India Gate and each block has eight shops, adding that some states have shown their interest to set up their food stalls.
“Ice cream carts will only be allowed in the vending zones. Although we have not taken any decision, we will ensure that these ice cream trolleys are not allowed along roads,” the official said. (PTI)