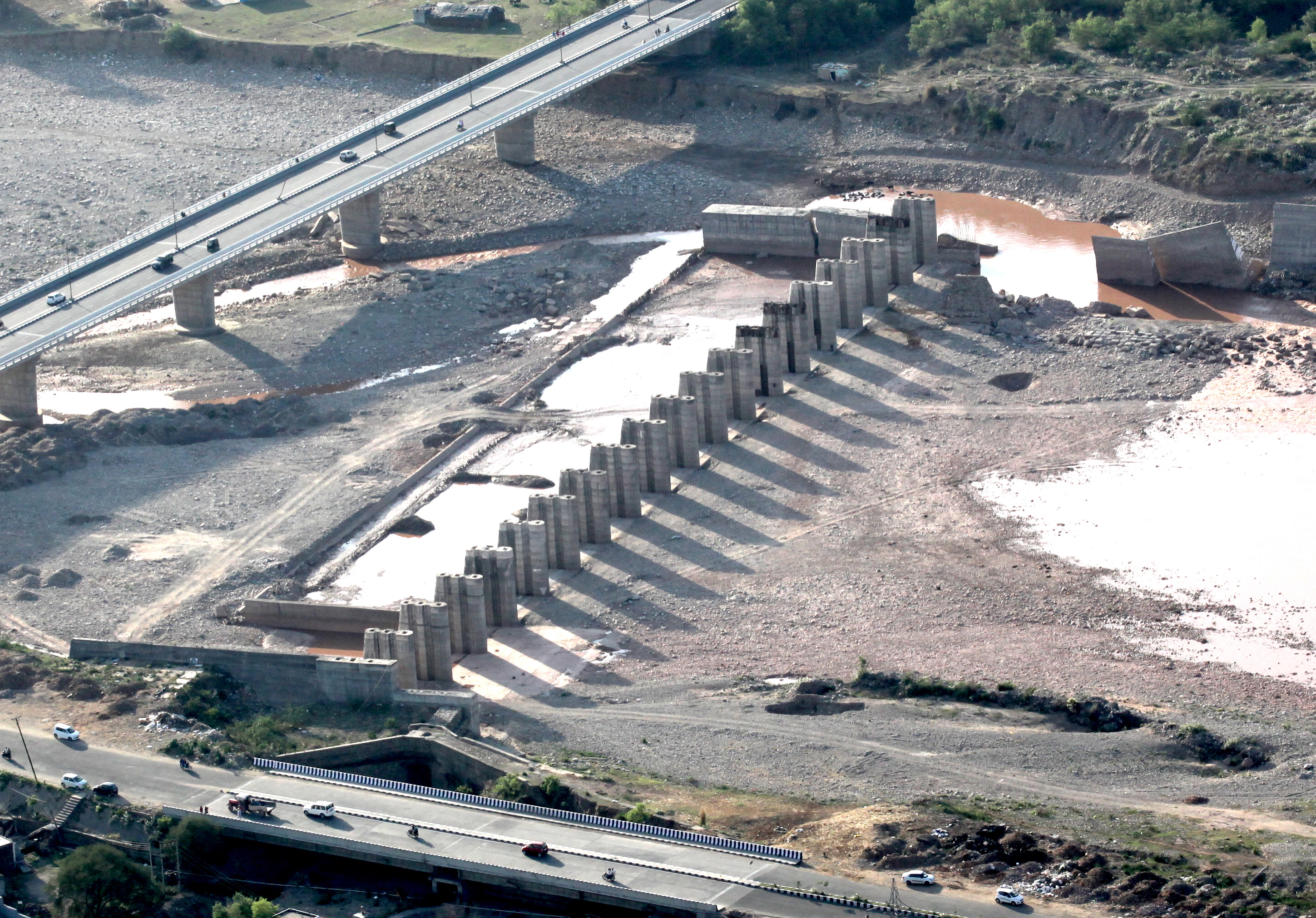 No new deadline fixed for completion of vital project

Mohinder Verma
JAMMU, June 10: Taking serious note of inordinate delay in resumption of work, the Government has set into motion the process to terminate contract for construction of auto mechanically operated gated barrage project on River Tawi in winter capital city and re-tender the left over works for execution through some other company.
In view of the continuous hanging fate of the prestigious project and latest developments, nobody in the Government is in a position to specify time-frame for completion of the much-hyped barrage, which otherwise has twin objectives of providing irrigation facilities to the farmers as well as to create artificial lake for tourism promotion.
Official sources told EXCELSIOR that in the month of November last year, the Minister for PHE, Irrigation and Flood Control Sham Choudhary, while inspecting barrage site, had directed the project executing agency—M/s GVR Infra Projects Limited to complete the work within a period of four months positively as the project has already missed several deadlines.
However, the directives of the Minister failed to yield the positive results and M/s GVR Infra Projects Limited could not resume the work mainly on the ground of its poor financial health, sources said.
On May 28, 2018, the Minister for PHE, Irrigation and Flood Control again directed the executing agency to restart the work of auto-mechanically operated gated barrage within a period of seven days or face legal action as permitted under the contract agreement. He had even directed the officials of the Irrigation and Flood Control Department to seize the machinery in case the executing agency fails to adhere to the latest directions.
“However, this warning has also been taken casually by M/s GVR Infra Projects Limited and no activity has so far been started on the project, which otherwise is already facing delay of over two years”, sources said.
Taking serious view of inordinate delay on the part of the company in restart of the work on the project despite several warnings, the Government has finally set into motion the process to terminate contract with M/s GVR Infra Projects Limited, they said while disclosing that Chief Engineer, Irrigation and Flood Control Jammu, who is Member Secretary of the State Level Contract Committee, has made a recommendation for immediate termination of contract to the Administrative Department.
“The State Level Contract Committee headed by Administrative Secretary of the PHE, Irrigation and Flood Control Department, will hold deliberations on the recommendation made by the Member Secretary in a meeting being convened on June 13”, sources said. Thereafter, the decision of the Contract Committee will be communicated to the Government for approval.
A senior officer of the Irrigation and Flood Control Department, who is directly, associated with the project, said, “the company is reeling under severe financial crunch and it doesn’t have money to carry out more work although experts of all fields deployed in Jammu are in the state of readiness to execute the left over work”.
In reply to a question, the officer failed to specify the time-frame for completion of work on barrage in view of latest developments. “In all probability the remaining work will have to be re-tendered and this process will take few months before fresh allotment of work”, he further said.
It is pertinent to mention here that the project is comprised of thirty-one gates, eleven in Badi Tawi and twenty in Nikki Tawi, which was approved at an estimated cost of Rs 70 crore. The latest deadline for completion of project was June 2018 which has already been missed due to inability of the company to adherence to the repeated directives of the Government.
When contacted, Commissioner/Secretary to Government, PHE, Irrigation and Flood Control Department M Raju confirmed that State Level Contract Committee will hold deliberations on termination of contract with M/s GVR Infra Projects Limited within next few days.
“We have been left with no other option but to take strict action against the company as it has delayed the project by more than two years on one or the other pretext”, he said, adding “since the Government is keen to ensure early completion of project exploring alternate ways is the only option”.
The project is of immense importance as on one side artificial lake due to construction of barrage will help in providing irrigation facilities to huge chunk of agricultural land and on the other side will become a source of attraction for the tourists.
However, with the completion of barrage the objective of providing sufficient irrigation facilities to huge chunk of agricultural land will be immediately achieved while as using lake for tourism promotion will take more time as the Government has yet not taken serious steps for diversion of nullahs, which are carrying sewage into River Tawi