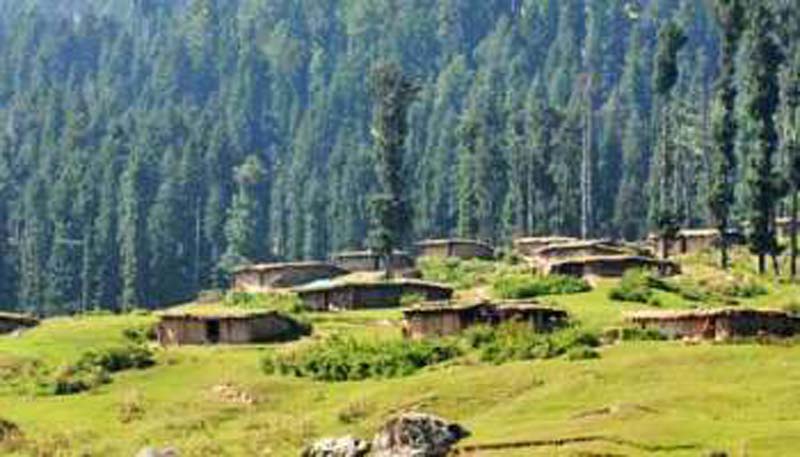 Encroachment of huge prime land at Humhama by officers, politicians

Mohinder Verma
JAMMU, Dec 19: Notwithstanding the detailed and explicit findings of a committee of officers, the Government is reluctant to initiate action against the encroachers of huge chunk of Kahcharai and State land in Budgam district’s Humhama area and treating the enquiry report prepared after over two years long exercise as trash.
The Government vide Order No. 105(Rev) dated August 11, 2016 constituted a committee headed by KAS officer R K Shavan and comprising of two more KAS officers namely Malik Suhail Ahmad and Nasir Ahmad Wani and another officer Imran Ahmad Bhat to enquire into the alleged encroachment of Kahcharai and State land at village Humhama in Budgam district and Soiteng tehsil in Srinagar district.
The terms of reference of the committee were demarcation of State and Kahcharai land; identification of the encroachers along with the details of the land encroached upon; position of records and entries made vis-à-vis these encroachments; officers and officials of the Revenue Department responsible for facilitating the encroachments; identification of persons in whose favour Kahcharai land was given in exchange of the revenue estates along with quantum of land and whether such exchanges were made in accordance with the land laws.
After over two years long hectic exercise, the committee finally submitted its report to the Revenue Department last month mentioning that several senior civil, police and other officers along with politicians including ex-Ministers and ex-legislators are among the encroachers of Kahcharai and State land in Humhama and Soiteng.
The committee made numerous recommendations vis-à-vis action required to be initiated against the encroachers and those officials of the Revenue Department who had facilitated the same so that other people are discouraged from making any sort of encroachment in future.
However, despite lapse of nearly two months the Revenue Department has yet not started acting on the recommendations of the committee, official sources told EXCELSIOR, adding “what to talk of initiating some strict measures the concerned authorities have even not preferred to serve notices to the encroachers”.
“It seems that Revenue Department doesn’t want to annoy the bureaucrats, senior police officers and politicians who have encroached huge chunk of Kahcharai and State land in Humhama area, which is a prime location near airport”, sources further said, adding “if the department feels that the report is not as per the terms of reference mentioned in the Government Order No. 105 (Rev) dated August 11, 2016 then it should reject the same to settle the issue once for all”.
An officer privy to the report of the enquiry committee said, “general recommendations have been made by the panel and the department will try to ascertain which recommendation can be accepted”. He, however, failed to specify time-frame for completion of this exercise. This has clearly established that the department is reluctant to initiate action on the findings of the enquiry committee.
In the report, the enquiry committee’s head had expressed apprehension about recommendations being taken seriously by the Revenue Department. “About a dozen similar enquiry reports were submitted in the past but no action was taken on them. Hopefully some concrete action will be taken in this case in the larger interest of the State otherwise the report will be another addition to the files in office records and nothing more”, he had mentioned.
“The encroachers should be asked by the District Collector concerned to vacate the identified structures at their own in first instance and in case the encroachers fail to vacate the premises, Government should identify private land in the same village commensurate to the encroached area and recover the actual cost of acquisition from the encroachers along with additional penalty of at least 20% over and above so that other people are discouraged from making any sort of encroachment in future”, the committee had recommended.
“Those bureaucrats and police officers who have encroached the land need to be proceeded against by the Government and the revenue officials who have attested the mutations in illegal manner are required to be identified for taking departmental action”, the committee had further recommended.