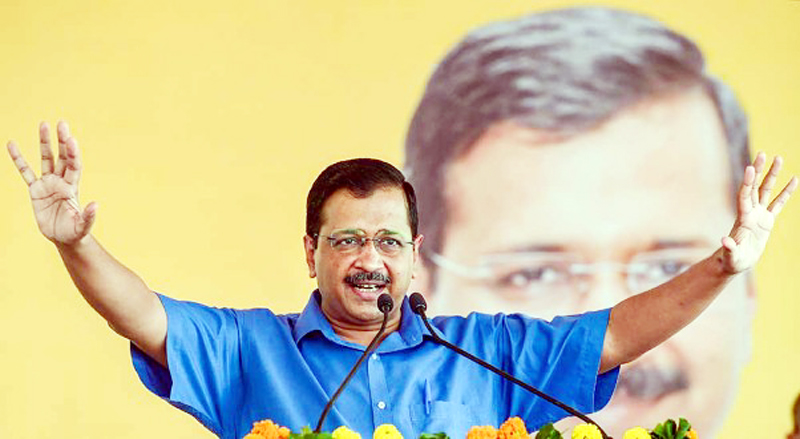 CHANDIGARH, Sept 29:
AAP leader Arvind Kejriwal on Wednesday said the Punjab Government has been reduced to a “tamasha” and urged new CM Charanjit Singh Channi to immediately remove “tainted” ministers from his cabinet.
The Delhi CM said this at the Chandigarh airport, a day after the Congress was pushed into a fresh crisis by the resignation of Navjot Singh Sidhu from the post of the state party.
Sidhu on Wednesday in a video message flagged the issue of appointment of “tainted” officials and ministers.
Kejriwal, who is the Delhi CM, also asked the Punjab CM to act on the promises made by his predecessor, including the action in the Bargari desecration case.
During the previous SAD-BJP regime, torn pages of a religious text were found at Bargari in Faridkot. Later, in police firing incidents protesters, two people were killed at Behbal Kalan and many injured in Kotkapura.
“We are seeing what kind of political atmosphere is prevailing in the state. Political instability is there, which is unfortunate,” said Kejriwal, who arrived on a two-day visit to Punjab. “A dirty fight for power is going on. People are not able to understand whom they should approach for their problems,” he said. “They have reduced the government to a ‘tamasha’,” alleged Kejriwal.
He said accusations have been made that Channi has inducted “tainted” people in his Cabinet.
“I request that they should be removed forthwith, cases be registered against them and they be dealt with strictly,” he said. While he congratulated Channi on his elevation as the Punjab CM, Kejriwal said people of the state want him to act on five issues, including the Bargari desecration case.
“The mastermind in the sacrilege incidents have not been punished till now. I don’t need to tell who the mastermind are. Their names are there in the report of Kunwar Vijay Pratap Singh and Channi can go through that. The culprits can be arrested within 24 hours,” he said. Kejriwal said the promises made by former chief minister Amarinder Singh to the people of Punjab should be fulfilled by the Channi-led government.
“Amarinder had promised to give jobs to the youth and till the time they got one, he had promised to give unemployment allowance. That allowance should be given. He had promised loan waiver to farmers,” he said. (PTI)