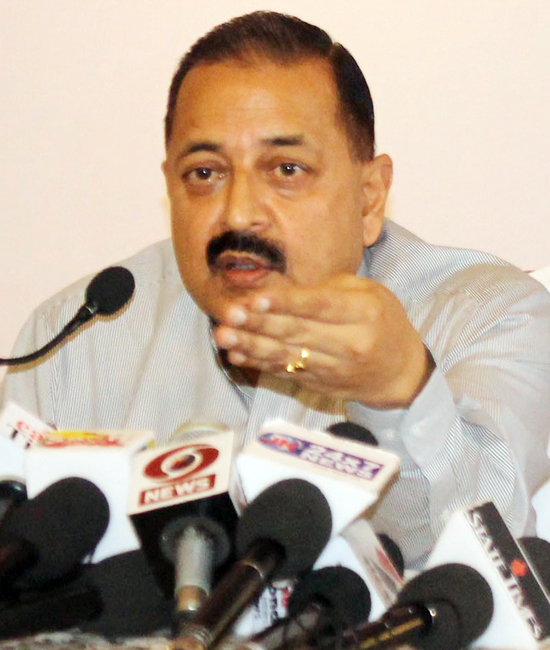 Avtar Bhat
JAMMU, June 1: Maintaining that Government is fighting a decisive battle in Kashmir to weed out Pak sponsored terrorism, Union Minister of State in PMO with independent charge of North Eastern Region, Dr Jitendra Singh today said that Government’s resolve will ensure that it will be the last chapter of Pak terrorism in the Valley.
While talking to media persons at a press Conference organized by Press Information Bureau, Government of India here, today to present the four years achievements of Narendra Modi Government, he said Pakistan is also feeling the heat of the same as over 600 terrorists were eliminated by the security forces in the State in recent times the number of which is higher than UPA first and UPA IInd.
Responding to a question, Dr Jitendra Singh said that all the issues with Pakistan will be settled both at political cum diplomatic and military levels. While allaying the fears of the people regarding talks with separatists, he said that any decision taken by the Centre with regard to Kashmir will be in the larger interests of the nation.
The Union Minister said that perception of world has changed about Pakistan and even those countries in world who earlier had sided with it have now come round the Indian stand which is a great achievement of Narendra Modi Government.
Maintaining that people of country are very sensitive about Kashmir, he said Indian Government will do everything which will be in the larger national interests.

Click here to Watch Video
Responding to another question that the Congress which has forged united opposition against BJP was saying that in next general elections there will be one united opposition candidate against each BJP candidate, Dr Jitendra Singh said that the local bypolls get affected by local factors but this will never be a factor for general elections. He said that opposition had tried earlier the one seat candidate experiment but you will see this will not last long.
He said the youth of this country want a stable Government as well as a dedicated Prime Minister and BJP has a candidate like that in the shape of PM Narendra Modi.
Responding to another query that delimitation and equitable development was the poll plank of BJP in last elections, the Union Minister said that delimitation was also part of Agenda of Alliance (AOA) “and I don’t know why the State Government is not going for it’’. He assured that he will talk with concerned in the party over this issue.
Responding to another query regarding a BJP leader and MLA fighting for Dogra Swabhiman (self esteem), Dr Jitendra Singh said that it was BJP only which has fought for Dogra Swabhiman right from beginning and party leaders, Dr Shyama Prasad Mookerjee and Prem Nath Dogra launched a crusade for the same. “Dr Mookerjee laid down his life for this great cause, so it is good if any one is also talking of Dogra pride’’, he added.
On the Ramzan ceasefire violations by militants, he said “we had already declared that it will be conditional ceasefire and in case militants violate it the security forces reserves right to retaliate. Terming the Ramzan ceasefire a good initiative by the Government, he said “we had made it clear that if you violate the rules of Islam and holy Quran we will retaliate and that happened’’.
He said that no one will be invited to meet Union Home Minister who is visiting the State next week for talks but maintained that no body will either be debarred from meeting him.
Dr Jitendra Singh, while responding to another question that alliance was not on the same page on Article 370 and Article 35 A said there are natural contradictions in coalition. “The J&K is in focus because of its sensitivity. In the State the coalition has also a Common Minimum Programme (CMP), which is called AOA so we have to agree on common issues’’, he added.
He said the focus of AOA was development and the alliance has agreement on development and not ideological issues. “The party has demanded 44 plus seats and give us the same we will fulfil the promises based on our ideology’’, he added.
Highlighting the four years achievements of Modi Government, he said that it was committed to ensure transformation of India through economic upliftment and social reforms.
While listing out the achievements of the Government in last four years, Dr. Singh said that Government was committed to ensure all round and inclusive development of the country. A renewed trust has developed between the people and the Government under the leadership of Prime Minister, Narendra Modi, he added.
He further said that this credibility was the foundation of certain tough measures like demonetization taken by the Government.
Dr. Singh emphasized that the overall development of the country was possible only through equitable development of all regions. He also said that the Central Government was making efforts for equitable development of Jammu, Kashmir & Ladakh regions. Various schemes and initiatives started by the Government were not only aimed at economic reforms but also at social and behavioural reforms, he added.
While giving the details of the implementation status of various schemes in Jammu and Kashmir, Dr Singh said that 20 lakh accounts had been opened in J&K. He also informed that 7 out of 22 districts in J&K had been declared Open Defecation free. While appreciating the positive response of people for various initiatives of the Government, he said that nearly 4 lakh women have benefitted from Ujwalla scheme in the State.
Dr Jitendra Singh said that the Government was keen to protect the interests of all sections of society by providing insurance to farmers, senior citizens, etc., at a low cost.
The Union Minister also emphasized that there was a need to create favorable environment for entrepreneurship as well as investment in the country. Various initiatives were being taken to improve the ease of doing business and simplification of procedures. Initiatives like rationalization of tax through GST and Startup India would be yielding benefits in the coming years, he added.
Dr. Singh reiterated the commitment of the Government in fighting corruption and providing clean governance to people.
A power point presentation was given by Miss Neha Jalali, Deputy Director, Ministry of Information & Broadcasting, Government of India highlighting the details and implementation status of various schemes.
Earlier, Dr. Singh also held an informal interaction with Radio Jockeys of various Private FM channels and Radio Kashmir Jammu.