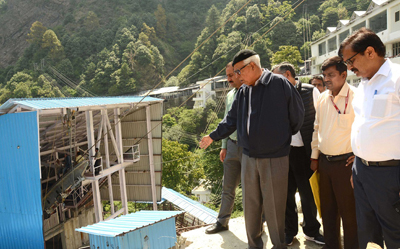 Excelsior Correspondent
KATRA, May 12: Governor N. N. Vohra, Chairman of the Shri Mata Vaishno Devi Shrine Board, today visited the Shri Mata Vaishno Deviji Shrine area to inspect the various major infrastructure development projects and facilities under execution for promoting the convenience of pilgrims to the Shrine.
Governor, accompanied by Umang Narula, his Principal Secretary and Chief Executive Officer of the Shrine Board; Dr. M. K. Kumar and Anshul Garg, Additional Chief Executive Officers; M. M. Gupta, Chief Engineer and other concerned officers of the Shrine Board, reviewed the upcoming Siar Dabri-Bhawan Material Ropeway which is being installed at a cost of Rs. 12 crore.
The trial runs of the Ropeway are scheduled to commence within the next 3 days. The Material Ropeway with a span of 3 km has a carrying capacity of 5 tons of materials per hour.
Governor directed the speedy completion of every pending item to make the Ropeway functional by the planned date. He  directed CEO to ensure effective utilisation of this exceptional facility which shall enormously reduce the logistics of ferrying materials, food stuffs etc. on the Yatra tracks and thereby enhance the convenience of pilgrims.
Governor also extensively reviewed the work on the upcoming Passenger Ropeway being installed between Bhawan and Bhairon Ghati at a cost of Rs. 60 crore. He inspected the waiting hall for the passengers, Automated Fare Collection System and other facilities for the pilgrims; walked down the Lower Terminal of the Ropeway and took stock of the safety measures for the commuters. He issued instructions for beautifying the area around the terminal.
Later, the Governor travelled on the 7 km long Tarakote Marg and reviewed preparedness for its operationalisation. He stopped at several places and took stock of the various wayside facilities and the arrangements put in place for the facilitation of movement of pedestrian pilgrims on this new Marg. He inspected the Bhojanalayas, View Points, Medical Unit, Toilets, Water Points and reviewed the arrangements of power supply, lighting, sanitation and cleanliness, besides safety and security arrangements for the pilgrims.
He directed the urgent  installation of additional Water ATMs to provide free of cost Filtered Water for the pilgrims, place more benches and dustbins at regular intervals for the convenience of pilgrims. In order to enhance the ambience of the track, he instructed the planting of additional flowering plants and landscaping at various locations.
It is pertinent to mention that Prime Minister has accepted the Governor’s request to formally inaugurate the Tarakote Marg on 19th May. Meanwhile, the pilgrims have been invited by the CEO to start using the Tarakote Marg from tomorrow, 13th May 2018, to get a taste of this beautiful and easy to walk new track.
Earlier, on reaching the Bhawan from Srinagar this morning, the Governor visited the Holy Cave Shrine of Shri Mata Vaishno Deviji along with the First Lady, Usha Vohra, and prayed for peace, progress and prosperity of the State.