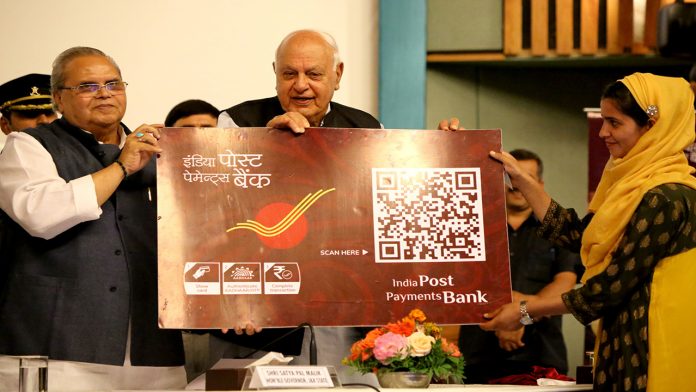 Speaking on the occasion, the Governor said that with the launching of Postal banking network, another crown has been added to the rich history of Indian Postal services. He said despite introduction of internet and other technologies, the relevance of post offices is still intact and it continues to be a major source of communication in the rural and far-flung areas. He expressed happiness on the nation-wide launch of banking services by the Postal Department and hoped that initiative will give further boost to the economic activities in the rural areas where banking services are still not available.

He said it is the vision of the Prime Minister, Narendra Modi to provide banking access to everyone, especially the marginal sections of the society to ensure benefits of various flagship programmes launched for their welfare and launching the Postal Banking service will prove an instrumental in this direction. He observed that rural economy will grow further and people in the rural areas will connect with this network and avail benefits of various government schemes.

The Governor informed that in Jammu and Kashmir, there will be 8 branches of India Post Payment Bank located at Jammu, Kathua, Udhampur, Rajouri, Srinagar, Anantnag, Baramulla and Leh and all these branches will start functioning immediately.  He said all 1.55 lakh post offices across the country will be linked to India Post Payments Bank by December 31. The move is likely to take banking services to India’s every corner, said the Governor.

Dr Farooq Abdullah while welcoming the launch of this ambitious programme said that the initiative will give fillip to the rural economic activities and help in implementing welfare schemes at the grass root level. He said post offices are the basic institutions connected with the common man and adding financial services is a step-in right direction which will directly help the rural population and meet their requirements.

He said the post offices are still rendering valuable services across the country and even more relevant in the rural areas. He appreciated the Government of India for further strengthening these ground level financial institutions.

The Post Master General, J&K briefed about the features of IPPB and said that IPPB will cover the services like paperless banking with most secure Aadhaar enabled transactions and doorstep banking which is trust of India Post. The services like transferring of subsidies, scholarships, pension etc which will directly go in the account holders are also available. He said the main objective of the scheme is to bring all people in the ambit of banking channel. The targeted segments are various beneficiaries of welfare schemes of Central/State Government, migrant workers, cooperative societies, dairy federations, old age pensioners, merchants, students, homemakers etc. This is a simple banking and no surcharges on account of ATM/SMS and non-maintenance of balance will be charged from the costumers.

The Postmaster General also presented mementoes to the Governor and Dr Farooq Abdullah on the occasion.

A special cover on ‘Financial Inclusion’ was released on the occasion by Governor and Dr Farooq Abdullah.

At the launch event, live opening of IPPB accounts of local artisans was done and QR Cards were distributed to account holders by Governor and Member of Parliament, Srinagar.

IPPB will leverage the network of 1.55 lakh post office branches to provide banking and financial service to people all over the country. This will create the country’s largest banking network with direct presence at village level. It is an extension to the Jan Dhan Yojana which brought the country in the folds of banking system. IPPB is taking the bank to citizen’s doorstep.