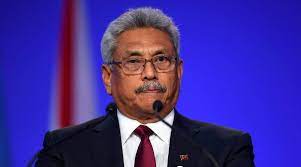 SINGAPORE/BANGKOK, Aug 11: Sri Lanka’s ousted president Gotabaya Rajapaksa arrived in Thailand on Thursday on a charter flight for a temporary stay before seeking permanent asylum in another country after his short-term visit pass expired in Singapore, according to a media report.
Rajapaksa is believed to have arrived at Bangkok’s Don Mueang Airport around 8 pm Bangkok time from Singapore’s Seletar Airport earlier in the evening, The Straits Times newspaper reported.
Rajapaksa arrived in Bangkok on the same day that his visa in Singapore expired, the report said.
Rajapaksa boarded the flight from Singapore to Bangkok, after Thailand confirmed a day before that it had received a request from the current Sri Lankan government for him to visit the country.
A condition for Rajapaksa’s stay in Thailand is that he should not cause problems for the country.
Prime Minister Prayut Chan-o-cha on Wednesday confirmed a temporary visit to Thailand by the 73-year-old embattled Sri Lankan leader for humanitarian reasons, and said he promised not to conduct political activities in the kingdom during his search for permanent asylum in another country.
After fleeing to the Maldives on July 13, Rajapaksa then flew to Singapore, where he announced his resignation a day later after months of protests over Sri Lanka’s unprecedented economic crisis.
“This is a humanitarian issue. We have made a promise that it’s a temporary stay. No (political) activities are allowed, and this will help him find a country to take refuge in,” Prayut was quoted as saying by the Bangkok Post newspaper on Wednesday. Foreign Minister Don Pramudwinai said the ousted president can stay in Thailand for 90 days as he is still a diplomatic passport holder, the report said.
Don said the Sri Lankan government did not oppose the visit and the Thai government would not make accommodation arrangements for him. The visit would not pose conflicts with Colombo as acting President Ranil Wickremesinghe had worked for him when he was in power, he added.
The minister said a condition for Rajapaksa’s stay was that he should not cause problems for Thailand.
Meanwhile, a report in the Daily Mirror newspaper in Sri Lanka said Rajapaksa will return to Sri Lanka in November after his 90-day Thai visa runs out.
The Sri Lankan government had directly appealed on behalf of the ousted President and sought permission to allow him to seek temporary shelter in Thailand, the report said.
However as the 90 day Thai visa runs out in November, political sources said that Rajapaksa will return to Sri Lanka as he was a Sri Lankan citizen and had all the legal rights to remain in the country.
Although several attempts had been made for Rajapaksa to seek asylum in the Middle East, he had not received any favourable response, the report said.
It also said that the cost for the Rajapaksas to flee from the country was borne by himself and his son Manoj Rajapaksa and no state funds had been utilised so far except for the Air Force flight that was used to transport him and his wife from Colombo to Male last month.
Sri Lanka, a country of 22 million people, is under the grip of an unprecedented economic turmoil, the worst in seven decades, leaving millions struggling to buy food, medicine, fuel and other essentials.
The massive protests that began in March culminated with Rajapaksa’s resignation.
The protesters accused the Rajapaksa family, which has dominated Sri Lanka’s political scene for nearly two decades, of plunging the country into the worst economic crisis since the country’s independence in 1948 through mismanagement and corruption.
The country, with an acute foreign currency crisis that resulted in foreign debt default, had announced in April that it is suspending nearly USD 7 billion foreign debt repayment due for this year out of about USD 25 billion due through 2026. Sri Lanka’s total foreign debt stands at USD 51 billion.
The United Nations has warned that 5.7 million people “require immediate humanitarian assistance,” with Sri Lankans experiencing extreme shortages of essentials including food, fuel and medicines.
The new Sri Lankan government led by Rajapaksa’s ally Wickremesinghe faces the task of leading the country out of its economic collapse and restoring order. Sri Lanka has seen months of mass unrest over the worst economic crisis, with the government declaring bankruptcy in mid-April by refusing to honour its international debt. (PTI)