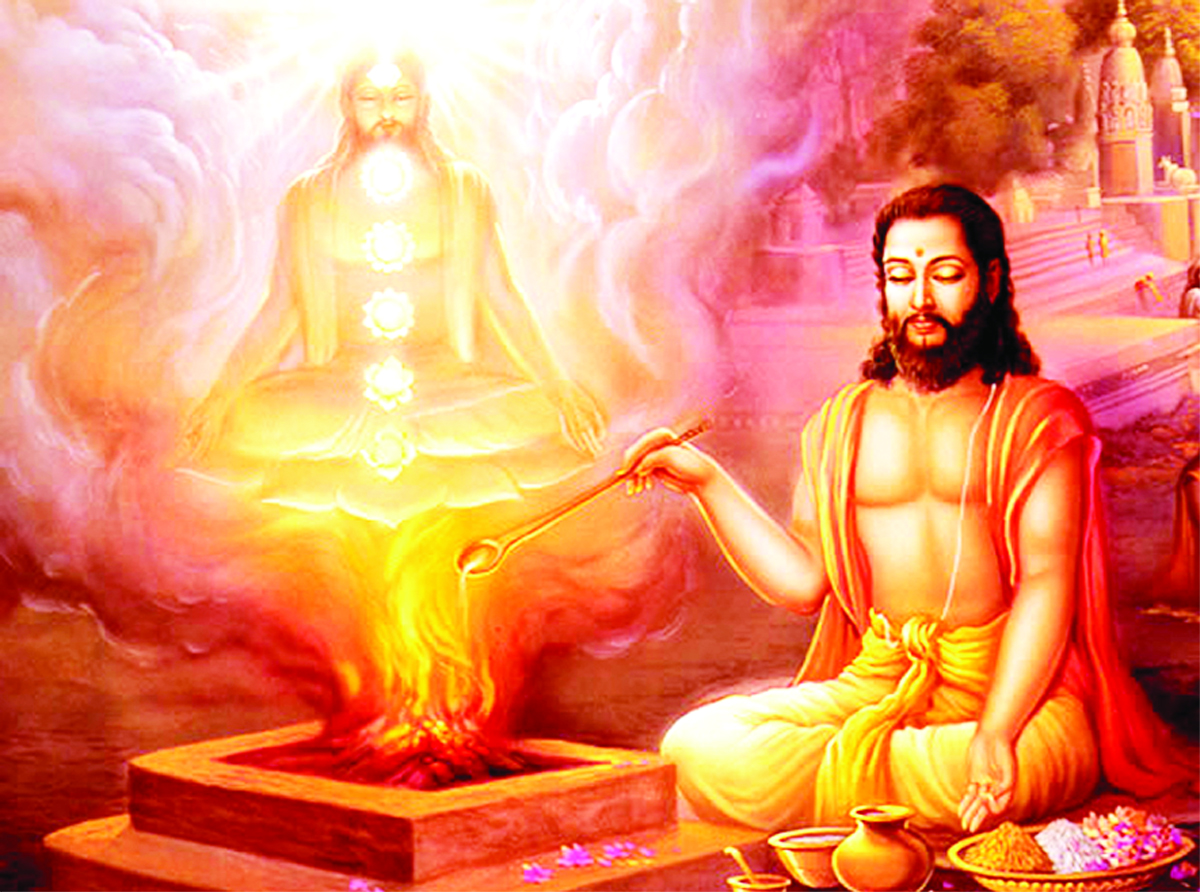 Swami Ram Swarup
Yes, not a single materialistic article of the world like wealth, friend, relative or any family member can provide us happiness except Supreme power God; [Rigved mantra 1/67/4 refers].
However, the above fundamental laws preached by God, to gain happiness, cannot be adhered to until we follow eternal vedic path facilitated by God. For example- Idea of Yajurved mantras 40/1 and 2 is as follows-
(i) God is omnipresent, therefore, He is watching us every time hence we should never commit sins. We should make use of the worldly articles to live upon, by giving up worldly thoughts of mind and intellect and attaching the mind and intellect with God. Donot be greedy, never be desirous of other’s wealth etc. unjustifiably; as the worldly materialistic articles like wealth, family etc. have never become permanent property of anyone. So, those who hold the said vedic preach, such religious persons discharge their moral duties faithfully, while being duly detached and not others. Thus they attain long, happy life and salvation.
(ii) A person must discharge his duties as mentioned in Vedas, selflessly. In this way, he would never indulged in sins.
You see, nobody wants sorrows but happiness. However, in present scenario, it is a matter of concern that being indulging in illusion, due to lack of vedic knowledge, thereby lack of fundamental law of Vedas, we, the human-beings, are mostly attracted towards the materialistic articles, family members etc. to seek happiness but fundamentally it does not exist therein.
Infact, if we are not aware of the best use of the materialistic articles of the world, as preached in Vedas, then the said articles along with family member etc. become sorrow giving means. (Sankhya Shastra Sutra 1/2 and Shatpath Brahmin Granth shlok 14/6/7/30 refer).
Therefore, let a person be a multi-millionaire along with all sources of worldly enjoyment but Rigved mantra 1/2/3 states that until and unless he listens to Vedas from learned Acharya and follows its preach, he will be surrounded by multiple problems, tensions, even diseases etc.
Here, Rigved mantra 10/101/11 preaches when an aspirant worships God and does daily practice of yog philosophy, then God manifests within his heart, showers pleasure and destroys all sorrows.
According to Vedas, until we gain vedic knowledge from a learned Acharya, the above pleasure, blessings etc. cannot be attained. In the public of previous yugas, the vedic preach was in vogue, so they enjoyed a long, happy life, as mentioned in Mahabharat epic. But at present, due to lack of Vedas’ knowledge, the public is experiencing sorrows and multiple problems at all levels.
So, is it not our indulgence that we are seeking pleasure in worldly articles only and have given up the Vedic worship and discharging of moral duties as per Vedas.
Where on one hand, Rigved mantra 1/24/15 stresses to obey only the fundamentals of Vedas, to worship to attain pleasure/salvation, there on the other hand, in the present times, mostly, we the human-beings have denied to obey God and have spread our own ways to follow, which are contradictory to God. Then where would the happiness, international brotherhood, peace and other religious facilities exist?
Study of Vedas reveals that every matter of the universe like sun, moon, fire, air, earth, water, space, wealth, food grains, gold, silver, diamonds, gems, iron, brass, coal, oil, natural gases, petroleum etc. and even the humans’ as well as all living-beings’ bodies have been created by God only to give pleasure thereof to the souls.
In this regard, Rigved mantra 1/22/15 states that this huge expanded/spread earth is meant for extreme happiness where there exists not even a single thorn to cause suffering/pain to human-beings.
Atharvaved mantra 11/3(2)/32 preaches that the main subject of the preach of four vedas is God and the main motto of the human life is also to realise God.
In this regard, VyasMuniji quotes a true story- Once Rishi Aavatya asked Rishi Jaigeeshavya- “Oh !Rishi, before attaining salvation, by experiencing several sorrows and pleasures again and again in several births by you; what more did you gain? Bhagwan Jaigeeshavya replied, “The pleasure of satisfaction (Santosh) is said to be the greatest than pleasure gained from five senses”. But the pleasure of satisfaction is mere sorrow as compared to the divine pleasure of attaining salvation.
The conclusion of this article is that God is the only Supreme power to give us worldly happiness and salvation but when He is being ignored along with His Vedas then all efforts to maintain peace at world level, even by the politicians, will sure go in vain. It will neither give happiness nor overcome ravages of hatred, poverty, violence etc.
We must follow vedic path, the treasure of knowledge, while respecting and following all sects as well.