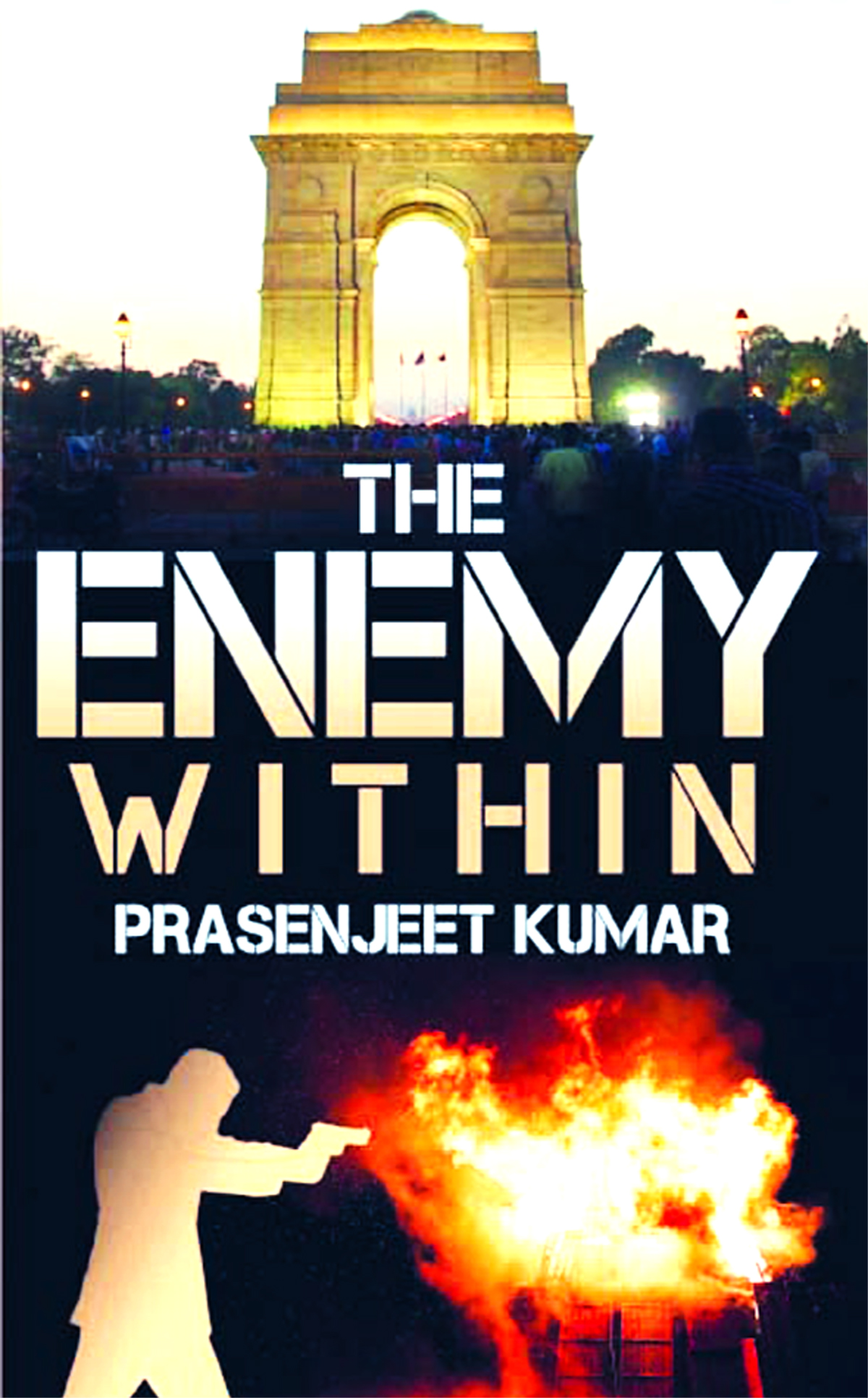 Excelsior Correspondent
“The EnemyWithin” written by Prasenjeet Kumar rings a familiar bell. Not because Prasenjeet is a regular columnist in Daily Excelsior, but because the plot looks so uncannily similar to whatever is unravelling around us in the form of the NDTV-Chidambaram shenanigans.
Technically, this novel takes forward the adventures of Major Akhil Thapar and Amrita Arora, who were first introduced by Prasenjeet in his novel “Still Missing…” some two years back. Incidentally, that bookwas set in Kashmir and England and appeared to be loosely based on the Daniel Pearl’s beheading by the LSE-educated terrorist Omar Sheikh. “TheEnemyWithin” is Kumar’s tenth novel, out of 31 books he has written so far, including the much talked about “Kashmir is Free” and “Kashmir Thinks It’s Free”co-authored with his J&K cadre IAS officer father Dr. Arun Kumar.
“TheEnemyWithin” is undoubtedly a gripping, fast-paced, espionage thriller that is guaranteed to keep you awake at nights, forcing you to keep the pages turning at a furious pace to find out what happens next.
The story revolves around Major Akhil Thapar and his beautiful wife Amrita Arora in a breathtakingly new mission. Major Akhil Thapar who lost his left leg battling Jihadi terrorists in the Poonch sector of Jammu & Kashmir is on deputation to R&AW, India’s premier spy agency, like the CIA or the Mossad. There he is tasked to infiltrate a ruthless module of the ISIS terrorists. His mission is to find out what they are planning and to sabotage that, if possible.
His wife Amrita Arora,has recently joined SDTV (the name sounds eerily familiar!) “for better prospects”, as she admits reluctantly.Initially excited at the prospect of working with Sunita Kapoor, the award-winning journalist who became a household name after the Kargil war, Amrita is soon dismayed and disgusted at the contrived slant of her news channel.
Her boss Sunita downplays the threat Islamist terrorists pose to India and wants her instead to write articles about Hindu terror, on the persecution of minorities etc., topics that leave Amrita Arora cold and squirming. Was Sunita being guided by her left-liberal ideological motivation, or something far more sinister? Prasenjeet tries to answer all that in a masterful narrative, in a way that the reader understands and empathises with the pain and confusion coursing through Amrita’s mind as she debates between loyalty to her office or to her country.
When matters heat up,and the government accuses SDTV of being a money laundering conduit, Amrita decides to take matters up in her own hands. Her ideological motivations for doing so are pretty deep. At one point in the novel, she proudly declares, “I had become a journalist to fight and expose evil. But in this place, I don’t think I can do that at all.” Call this conviction or stupidity, but such an attitude really ensnares the reader to finding “what happens next.”
Prasenjeet, I must say, has done an excellent job of portraying the secret services and the profession of journalism, their systems of training and recruitment, and their politics.
Sunita Kapoor comes across as a most complex character. She is charming, yet intimidating, even though she never raises her voice. I felt she had many characteristics similar to BarkhaDutt, but Prasenjeet is not admitting anything. At the same time, he is not at all judgemental about portraying his characters, even negative ones. Is she the villain? Or a saviour? He lets the readerskeep guessing till the very end, in a plot that looks eerily similar to what has been happening around us in real life.
Things get into a knot when the government also starts investigating the connections between SDTV and Kartik Narayanan, the Harvard educated ex-Home Minister and Finance Minister of India. The story indeed reminds us of the NDTV-Chidambaram controversy, but goes much beyond that, in an ending that is too shocking to be true.
But who knows how the NDTV-Chidambaram story too may eventually end? What if it turns out to be stranger than Prasenjeet’s fiction?
The story has so many twists and turns that your head will keep spinning. Who is the hero? Who is the traitor? Who is helping the nation? Who is sabotaging it? Who is the greater enemy? The enemy from outside? Or the enemy within?
Even if you dismiss the novel as a pure conspiracy theory, it is still a fun read. The characters and the places feel real and the reader gets the feeling that they’re there in the centre of the arena watching first hand as all the action unfolds.
The timing of the novel too is spot on, with the release date nearly coinciding with Chidambaram’s arrest.
The novel is available as an e-book on all platforms and formats like Kindle, Kobo, iTunes, Google Play, etc. That means anyone can start reading this book on his smartphone or tablet anywhere in the world in a jiffy. As for its paperback version, the same can be orderedfrom the websites ofAmazon, Flipkart, and Pothi.