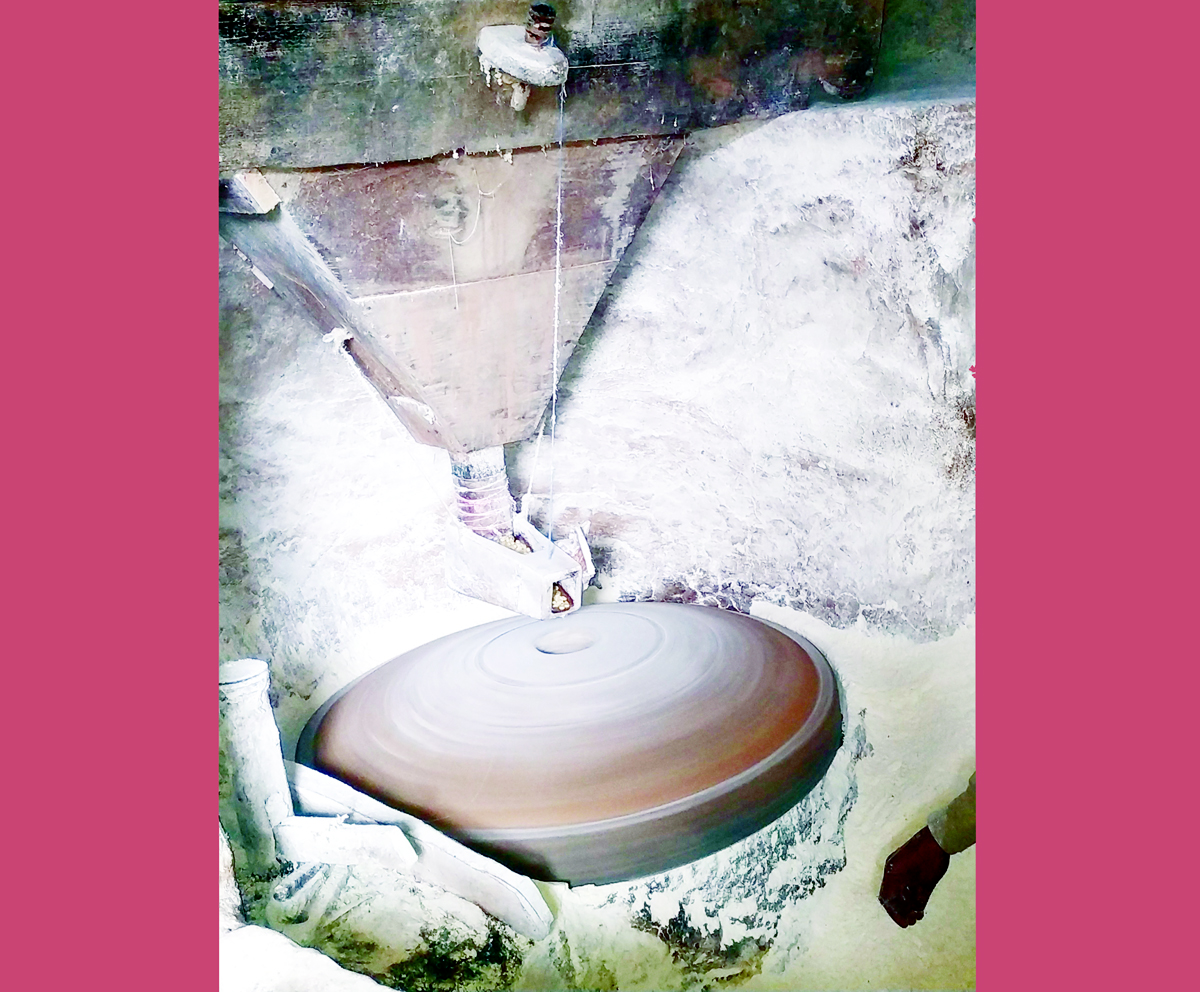 Ayodhya Nath Kerni
Prior to the use of watermill or gharat mankind perhaps used hand chakki for petty grinding requirements. The round shaped chiseled stone wheel is placed one over the other wheel, the lower having a pivot in the centre and upper a central hole where grains are put manually. A handle at the edge is provided to rotate the upper wheel to carry out grinding. Despite putting lot of manual labour the quality of grinding material is also very inferior as compared to gharat.
In fact water mill is not what the gharat is exactly. A peep into world history reveals that there was existence of water mill in 4000 BC in Egypt and other countries. An engineer Vitruvius who died in 14 AD is later credited with using vertical wheel. They were used for crop irrigation, for grinding grains and to supply drinking water to the villages.
Gharat is a structure that uses a water wheel or turbine to drive mechanical process of grinding. The flow of water used to turn a wheel axle upon whom chiseled, two round shape boulders are placed over the other. The lower stone wheel is fixed and upper rotates with flow of water arranged to fall on the blades of water wheel. Attempts were made for the innovation in the functioning of gharat such as increasing RPM from 700 to 2000, introducing gear system but they did not work successfully as high RPM spoiled the quality of atta.
The gharats were available in almost all the banks of rivers, tributaries, streams, irrigation channels of Jammu region. There were gharats at Jammu, Udhampur, Samroli, Dharamthal, Chenani and Venisangh near Devika Tawi confluence popularly called Venisangh, a sacred point where lot of people receive holy bath on special occasions. There were about a dozen gharats successfully working at Venisangh but due to selection of other professions they are at the verge of closure. During 1783 a European visitor George Forestor visited Calcutta to England following route of Kangra, Hamirpur, Nurpur, Jammu, Chenani, Kishtwar, Banihal and then Kashmir. He had praised the watermill of Jammu better than any other place in India as quoted in his travelogue p-285. The gharats available in Uttrakhand , Himachal and Jammu region are almost of same pattern. The electric chakkis have very fast replaced the gharats. The flour produced by gharats is full of taste and nutrients.
Whatever comforts us we grade it as Devta like air, water and so on and so forth same is the case with gharat. A stone idol of Gharat Devta is kept in Narsingh temple of village Kagote about which the legend goes like this: Long back Bains Rajput family was running a gharat near Kagote village. The functioning of gharat was blocked when incidentally a stone would fall into water turbine of the gharat. After removing the stone the gharat would again get functional. This evil incident continued for many days. Once owner of the gharat was half slept a statue of old man bearing turban appeared before his eyes and passed on some instructions and shadow disappeared. The owner of gharat consulted wise men of village and sought advice for remedial action. A palanquin was prepared decorated with flowers and stone idol was placed over it. The palanquin was taken to every nook and corner of the village and ultimately to Narsingh temple where idol was kept. The evil practice of obstructing the functioning of gharat was stopped and all the gharaties of Ramnagar, Kuh Nallah, Ritti etc started offering 2 kg flour every month. One who missed it had to suffer the loss. Even electric chakkis owners followed the practice till date.
During early sixties being in high school I had interaction with Mohru about the age of gharat operated by him. He categorically stated that his ancestors five generation earlier started gharat and coming generations followed the same profession. Mohru is believed to have died in 1966 and his next generations continued to run gharat. The quality of maize flour is so good that some people gift atta to their near and dear living at distant places like Delhi, Mumbai etc. The present generation of Mohru dynasty is happy to choose their profession to operate gharat and feel proud that they have continued centuries old profession of their family alive.
The Dogra ruler Maharaja Hari Singh safe guarded the gharats by enacting a revenue law under Gharat Act Bikerami Samvat 1989 by allotting separate Khasra Number. The present Govt. is also providing subsidies for gharats. We must encourage opening of more gharats so that good quality atta is provided.