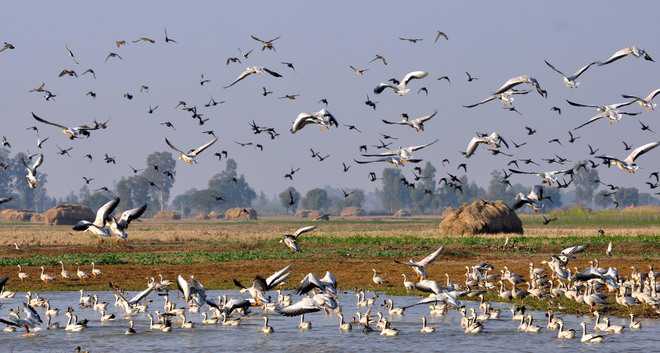 Govt may go for compulsory acquisition of 354 kanals

Mohinder Verma
JAMMU, May 13: The woes of world famous Gharana wetland have remained unaddressed even after numerous directions from the State High Court as negotiations for acquisition of private land to restore original area of the water body have failed to yield the desirable results during the past nearly one and half year.
The fast pace shrinking of Gharana wetland situated along the International Border with Pakistan in R S Pura tehsil hogged limelight when a Public Interest Litigation (PIL) was filed in the State High Court seeking various directions for restoration of pristine glory of the water body, which is abode for unimaginable number of bird species from different parts of world particularly Siberia.
In the PIL titled Rattan Singh Versus State of Jammu and Kashmir, the Division Bench of the State High Court in the month of December 2017 issued directions for acquisition of land to restore the original area of the wetland.
The direction was issued by the Division Bench headed by the then Chief Justice Badar Durrez Ahmed after the counsels for the petitioner as well as the then Additional Advocate General fairly admitted in the court that acquisition of around 408 kanals of land in the vicinity of Gharana wetland was the only option to restore its original area.
As 354 kanals out of 408 kanals of land belong to the private persons the district administration through Sub-Divisional Magistrate R S Pura started negotiations with the owners of the land. Even Forest Department officials were also involved in the exercise.
However, even nearly one and half year after the explicit directions of the High Court no headway has been made on acquisition of 354 kanals of private land, official sources told EXCELSIOR, adding “there is no change in the situation mainly because of unreasonable demand and adamant attitude of the owners of the land”.
“The Government approved rate of the land in the area is Rs 2.02 lakh per kanal while as the market rate is Rs 2.50 lakh per kanal but the occupants of the land are demanding Rs 15 lakh to Rs 18 lakh per kanal, which as per the opinion of the Revenue Department authorities is highly unjustified”, sources informed, adding “though Sarpanches and Panches of the area were also involved in the private negotiation but this attempt has also failed to yield the desirable results”.
When contacted, Sub-Divisional Magistrate R S Pura Jagdish Singh confirmed that there was no headway on private negotiations because of unjustified demand of the owners of the land. “Now, we have convened to the people that if they failed to shun their adamant attitude the Government would be left with no other option but to go for compulsory acquisition”, he added.
The administration will inform the High Court of the efforts made to acquire 354 kanals of the private land and seek orders to proceed further in the matter, the SDM said.
“The delay in acquisition of land is not only creating hurdles in restoring original area of the wetland but also acts as impediment in establishment of Sewage Treatment Plant by the Wildlife Department to check flow of untreated waste into the water body”, sources said while disclosing that at present Wildlife Department doesn’t have land required for setting up of STP.
It is pertinent to mention here that Integrated Development Plan has already been prepared for Gharana wetland wherein construction of embankment near the boundaries of the water body so as to facilitate plying of electric carts or tricycles for easy movement of the tourists and sufficient number of view-points have been proposed.
“However, all this would become possible only when required chunk of land is acquired and transferred to the Wildlife Department”, sources said.
This world famous wetland was spread over 1500 kanals including the catchment area. However, in the year 2009 the same was found only 213 kanals and 14 marlas.