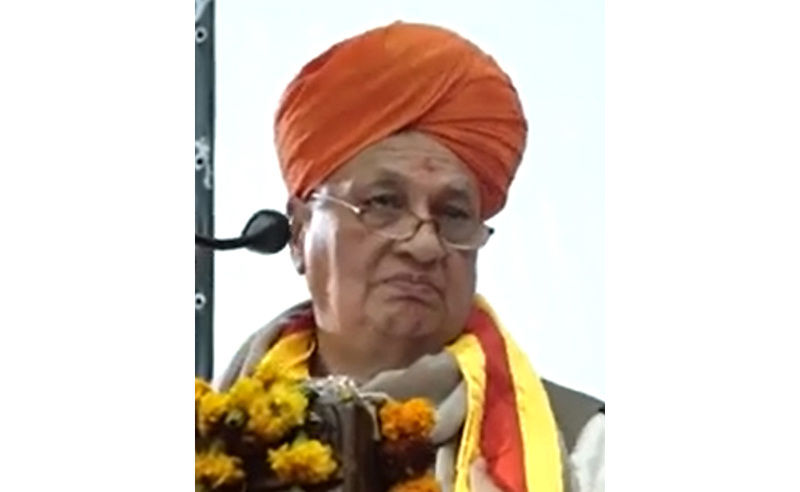 Excelsior Correspondent
JAMMU, Dec 8: Terming Kashmir as ‘crown of India’, Kerala Governor Arif Mohammed Khan today hit out at those, who were instrumental in eruption of separatism and terrorism in Kashmir and said that they had come from outside to Kashmir after being forced out of their homes in Central Asia.

Click here to watch video
He said that India is not a piece of land but a strong thought.
“After coming here (in Kashmir from Geelan in Iran), you (Geelani) wanted to disintegrate India into pieces (by engineering separatism and terrorism in J&K). He had come from Geelan (Iran). He was a Geelan national (not Kashmiri)”, Khan said in his address at a function ‘Message of Humanity’ here.

The Kerala Governor said that he (his ancestors) escaped from Geelan to save his life (their lives). “Your name says that you have come from outside into India”, he said and questioned why he was forced to come here and leave his home.
Khan said that nobody leaves his home unless there is threat to his life.
He said that they (Syed Ali Shah Geelani and their people) escaped from their homes (from their country) to save their lives. “Please tell me what relation he (Geelani) has with Srinagar (Kashmir)?, he questioned.
Syed Ali Shah Geelani, who died in 2021, was an hardliner and pro-Pakistan separatist leader in Jammu and Kashmir.
Khan said that Jammu and Kashmir is the crown of India. Asserting that nobody can disintegrate it from India, he said that India too is not a piece of land but a strong thought, which cannot be disintegrated.
Terming Prime Minister Narendra Modi’s slogan -Sabka Saath, Sabka Vikas aur Sabka Vishwas as a vibrant mantra, he said that to ensure development, there is need to arm everyone with knowledge.
Quoting Swami Vivekananda – So long as the millions live in hunger and ignorance, I hold every man a traitor who, having been educated at their expense, pays not the least heed to them, Khan impressed upon imparting knowledge to everyone to ensure overall development.
Meanwhile, Dogra Sadhar Sabha, J&K president Thakur Gulchain Singh Charak said J&K reflected the unique unified diversity of its cultures and religions.
“An adorable bouquet of Muslims with Hindus, Buddhists, Sikhs and Christians, that live together here happily and amicably as Dogras was seen in a healthy mix of all the religions. We are proving the verdict of the last Maharaja, Hari Singh who aptly said, “All religions are my religions & my religion is justice”, reminded Charak.
The DSS has stood by their message of unconditional ‘Humanity and amicable brotherhood’ by organising what they called “Payam-e Insaniyat/ Manavta ka Sandesh/ Message of Humanity, Charak said.