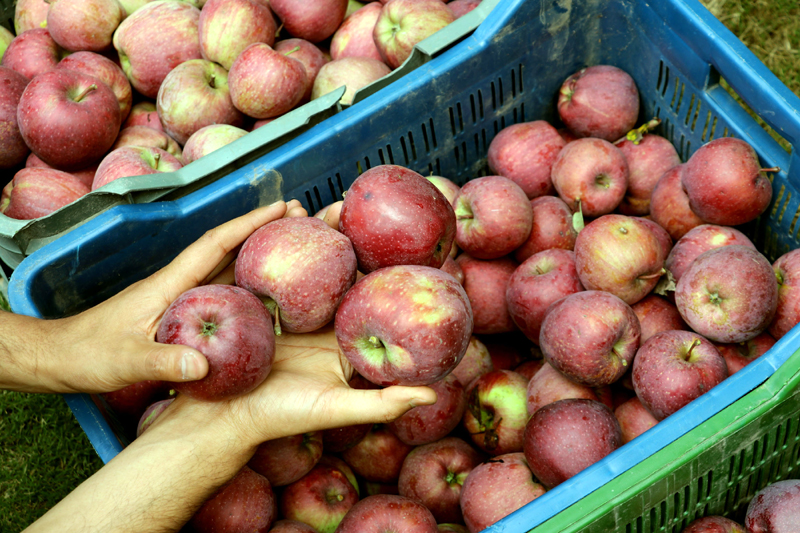 Suhail Bhat
Shopian, Sept 1: As the lockdown enters fourth week, the fruit growers fear heavy losses owing to Government’s reluctance to open channels of communication and allow outside traders to visit the Valley.
Every year hundreds of traders visit the apple orchards located in different parts of the Valley to buy the fruits. This year, they have decided to stay away from the Valley owing to the Government advisory asking the outsiders to leave the State on August 2. The unpredictable situation that developed after scraping of special status to the State and reorganized the State into two federally governed Union Territories equally affected the trade.
In most parts of the South Kashmir apple growers said they would have sold the entire crop around this time of the year. “We would have either sold our crop or would have been in the process by now. It would have saved us lots of manpower. Selling the standing crop is easier and reduces the cost of transportation and manpower. But that did not happen this time,” Wali Mohammad, an apple grower said.
He, however, lamented that following the stripping of State’s special status he is worried about the future of his orchards. “I have seen rough patches in sales earlier as well. But this time I am more worried about the future of this industry and my children,” he said.
In the last few days, South Kashmir has witnessed some movement of private transport during wee hours and after the Sunset. But the schools, business establishments, the public transport and most of the Government offices continued to remain locked. The fruit markets where from these apples are transported to different States are also padlocked, curtailing the chances to find potential buyers.
The closing of the local fruit markets would mean that the growers have to sell their crop in markets outside the State which can affect the price. “At local markets it is the growers who would determine the price but it is going to be otherwise in outside markets. The whole process has to end in a specific time frame as the fruit is a perishable item. The outsider trader can take advantage of the situation and force us to sell it at low price,” Abdul Rasheed, an apple trader said.
With apple harvesting season round the corner, the major challenge for the growers would be to find work force as majority of the outside workers have left the Valley following a Government advisory. The growers have to rely on the local workforce to meet the deficiency. “From picking to packaging, everything is done manually so a number of people are required for the job. So far, the labourers from the outside used to help but we have no other choice to tackle the problem with local workforce. It will be a big challenge for us,” Nissar Ahmad, a grower said.
Another problem the fruits are facing is to find buyers for the fallen apples. “the falling of the apples has started and there are no buyers this time which means they are all going to rot,” growers said, adding that huge deployment of security forces are discouraging the traders to move.