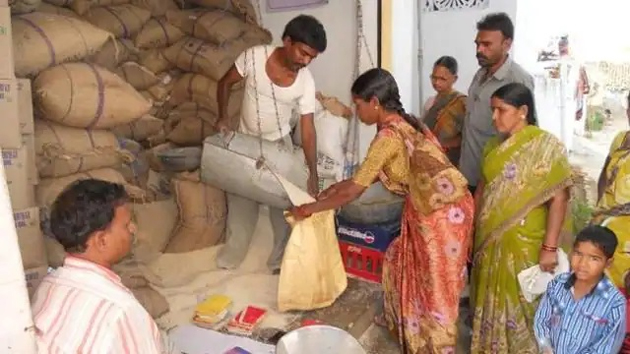 The Scheme of the Union Government of providing free ration to people who are from less privileged sections and duly categorised for purposes of eligibility criteria, benefitting a total number of 80 crore of beneficiaries across the country, was slated to be over by September 30 this year. It is now proposed to be continued for another three months. Needless to add, this figure of beneficiaries of 80 crore exceeds the total population of the UK and Brazil put together and , therefore, on the face of it, cannot be treated just an ordinary scheme. Prior to it , an extension of six months was given to this scheme in March this year costing Rs.80000 crore to the Government. The scheme has now been extended to the period ending December 31, 2022. In this connection, when we look at the position of Jammu and Kashmir in this regard as to how many beneficiaries from the poor sections were going to be benefitted, it comes to over 6 million people.
There are two categories of ration card holders in Jammu and Kashmir – falling under Priority House Hold (PHH) and Antodaya Anna Yojna (AAY) who are eligible and have been getting free ration since the inception of the scheme in April /May in the year 2020 . The need, therefore, is not only proper identification and making suitable changes, wherever required, in the number of beneficiaries but making available such ration without any hassles at the identified ration depots where a general complaint usually remains about either non availability of the ration or its delayed distribution and in both the cases , the basic purpose of the scheme as such gets defeated. In fact, the COVID pandemic and its aftermaths dealt a severe blow to the poor categories especially those who earn on daily basis and had virtually no work on account of imposition of lockdown and other restrictions of “closing down” to fight the dreaded virus .
Providing free ration for eight months to 80 crore initially and extending it periodically , now up to ending December 2022 is the only instance in the world where such a basic sustaining help has been provided to the most deserving categories especially the migrant labourers by the Government whose coffers itself suffered on account of the closing of major economic activities during two severe waves of the pandemic . A rough estimate of the cost of such free ration during the pandemic period alone was over Rs.2 lakh crore ending July 2021 and an estimate of cost of the scheme randomly reckoned works out to be Rs.4 lakh crore till date .
If an analysis of the factors leading to a shaky situation in this vital area for the last many years is made , it will be observed that while on the one hand food production and stocks kept increasing year by year thanks to the hardest work by our farming community, the agricultural scientists , timely credit facilities from the Banks etc but still the position of malnutrition in millions and near starvation in many did not improve. That amply shows that ”food for the poor” scheme , was either on papers or was not properly implemented. Besides, various instances in states of mass siphoning of the ration for the poor to the black markets led to denial of the ration to larger sections of the poor categories. Hunger anyhow may have been conquered as the present government claims a commitment of ” going to sleep not hungry ” but malnutrition still remains to be eradicated. Although crops of new varieties are encouraged to be grown across the country which are rich in proteins, zinc , vitamins etc and Anganwari workers are playing their considerable part in fighting malnutrition , yet lot remains to be done.
Whether providing free ration to such a whopping number and for nearly over three years across the country amounts to giving ”freebies” , divergent views can be expressed. While most of the people will not agree looking to the new trend in freebies lavishly promised and on questionable factors and avoidable grounds merely for votes , economists on the other hand will argue for a system to empower economically the prospective beneficiary in such a way that one was able to buy on one’s own instead of giving it all free . Since that entailed a time factor of years , people worst hit by COVID pandemic needed two square meals on immediate basis to put their body and soul together.