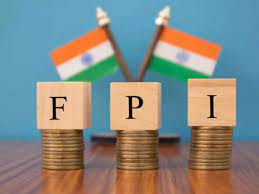 New Delhi, June 26: Foreign investors continue to desert Indian equity markets and pulled out close to Rs 46,000 crore so far this month following monetary policy tightening by the Reserve Bank and US Federal Reserve, high oil prices and volatile rupee.
The net outflow by foreign portfolio investors (FPIs) from equities reached Rs 2.13 lakh crore unitll now in 2022, data with depositories showed.
Given the policy normalisation narrative by the US Fed and other major central banks, coupled with high oil prices and volatile Rupee, FPIs are likely to stay away from emerging market assets, Hitesh Jain, Lead Analyst – Institutional Equities, Yes Securities, said.
FPIs inflow will only resume once there is visibility on the peak of bond yields in the US and an end to Fed rate hikes, he added.
Moreover, FPIs are likely to sell more if the current trend of rising dollar and bond yields persists, said VK Vijayakumar, Cheif Investment Strategist at Geojit Financial Services.
According to the data, foreign investors withdrew a net amount of Rs 45,841 crore from equities in June (till 24th).
The massive selling by FPIs continued in June as they have been relentlessly withdrawing money from Indian equities since October 2021.
“The RBI’s tightening of the monetary policy and inflated global commodity prices have primarily led the domestic markets to bleed in terms of substantial cash outflows from the equity markets during the last few months,” Manoj Purohit, Partner & Leader – Financial Services Tax, BDO India, said.
The pace of such withdrawals was last seen when the pandemic surged in the first quarter of 2020.
Globally, the ongoing military conflict between Ukraine and Russia, rising fed rates and the return of the pandemic outbreak have further added fuel to the fire, Purohit said.
Geojit Financial Services’ Vijayakumar said that the rising dollar and appreciating bond yields in the US are the major factors triggering FPI outflows.
Another important aspect that has contributed to the outflows from domestic stock markets is its valuation, which continues to be at a premium, despite the recent correction, compared with other relatable markets, Himanshu Srivastava, Associate Director – Manager Research, Morningstar India, said.
This has also resulted in foreign investors booking profit here and shifting their focus towards other markets, which are attractive on valuation and risk-reward front, he added.
Interestingly, the bulk of FPIs selling is in performing segments like IT and financials and domestic institutional investors (DIIs) are absorbing this liquidity.
On the other hand, FPIs invested a net amount of about Rs 926 crore in the debt market during the period under review.
The net inflow can largely be attributed to FPIs parking investments from a short-term perspective in the wake of ongoing uncertainties, Srivastava said.
Broadly, from the risk-reward perspective and with interest rates rising in the US, Indian debt doesn’t appear to be an attractive investment option for foreign investors, he added.
BDO India’s Purohit is of the view that this short-term pace of negative volatility is likely to slow down in the coming weeks if not reversed completely.
“India is still on a better footing as compared to other global markets primarily on account of sustained growth patterns, better GDP numbers, recovering forex reserves, consistent demand from consumers and good financial numbers by large corporates,” he added.
Apart from India, FPIs have been selling heavily in other emerging markets like Taiwan, South Korea, the Philippines, Indonesia and Thailand. (PTI)