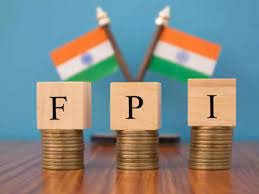 New Delhi, Sept 4: Foreign investors have pumped in a little over Rs 51,200 crore into the Indian equity markets in August, making it the highest inflow in 20 months, amid improving risk sentiment and stabilisation in oil prices.
This comes following a net investment of nearly Rs 5,000 crore by Foreign Portfolio Investors (FPIs) in July, data with depositories showed.
FPIs had turned buyers for the first time in July after nine straight months of massive net outflows, which started in October last year. Between October 2021 till June 2022, they withdrew Rs 2.46 lakh crore from the Indian equity markets.
India will continue to attract FPI flows this month too, although at a slower pace as compared to August, given continued rate hikes by the US Federal Reserve along with quantitative tightening, said Manish Jeloka, Co-head of Products and Solutions, Sanctum Wealth.
Arpit Jain, Joint Managing Director at Arihant Capital Markets, said inflation, dollar prices and interest rate will dictate FPI flows.
According to data with depositories, FPIs pumped in a net amount of Rs 51,204 crore into Indian equities during August. This was the highest investment made by foreign investors since December 2020, when they had infused a net Rs 62,016 crore in equities.
“Foreign investors started pumping in money into emerging markets as interest rates curve flattened and oil prices stabilised. Currency markets gained sanity and commodity prices fell as China’s growth and financial market took a hit,” said Vijay Singhania, chairman of TradeSmart.
Jain said correction in Indian equities, and falling oil and commodity prices, especially that of steel and aluminum, are the major reasons for FPIs buying despite a strong dollar and rising bond yields.
US inflation slowed down from a 40-year high in June to 8.5 per cent in July on lower gasoline prices. In India, the consumer price index-based retail inflation marginally eased to 6.71 per cent in July as against 7.01 per cent recorded in June due to easing food prices.
Himanshu Srivastava, Associate Director – Manager Research, Morningstar India, said the net inflows over the last few weeks can be attributed to multiple factors.
While inflation continues to be at elevated levels, in the recent times it has risen less than expectation, thus improving sentiments. This fanned expectation that the US Fed would be comparatively less aggressive than anticipated earlier with its rate hike, he noted.
Consequently, it eased recession fears in the US to some extent, thus improving investors’ risk appetite, he said.
On the domestic front, correction in the Indian equity markets provided investors a good buying opportunity, he added.
Sanctum Wealth’s Jeloka believes that the inflation situation in India is significantly better than that in developed economies and it is expected to come below the upper end of the RBI’s tolerance level of 6 per cent.
FPIs used this opportunity to hand-pick high-quality companies. They are now buying stocks of financials, capital goods, FMCG and telecom companies, he added.
In addition, FPIs infused a net amount of Rs 3,844 crore in the debt market during the month under review.
Apart from India, flows were positive in Indonesia, South Korea and Thailand, while it was negative for the Philippines and Taiwan during August.
The month of September has begun with huge volatility in FPI flows. On the first day of the month, FPIs bought equities worth a net Rs 4,262 crore, but sold to the tune of Rs 2,261 crore the very next day.
“This erratic trend is due to the uncertainty regarding dollar index and US bond yields,” said V K Vijayakumar, Chief Investment Strategist at Geojit Financial Services.
There is a view that the dollar and bond yields have peaked and when inflation starts trending down, the Fed will be less hawkish than now. This will facilitate more capital flows to emerging markets and India is the best emerging market to invest in now, he added. (PTI)