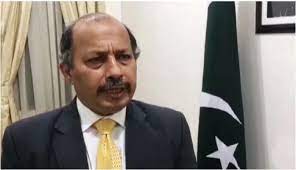 Kabul, Feb 21: Pakistan’s Ambassador to Afghanistan has said the presence of foreign terror groups such as Islamic State (IS) and Tehrik-i-Taliban Pakistan (TTP) are threat to both countries.
Speaking to TOLO News on Sunday, Ambassador Mansoor Ahmad Khan said, “Terrorist organisations present in Afghanistan have been posing threats to the security of Afghanistan as well as to other countries, including Pakistan. Daesh is there, remnants of Al-Qaeda are maybe there. There are other elements like TTP, Baluch insurgents and many other groups.”
On terrorist threats along the Durand Line, he said, “The fence was erected or installed in the previous years when the cross-border terrorism was at its highest and one of the ways the Pakistani state, Pakistani government, thought of dealing with this issue was to erect a fence.”
According to TOLO News, the tensions between Kabul and Islamabad have recently risen over the issue of the Durand Line.
While Pakistan has emphasised the need to complete the fencing along the Durand line, Taliban has said it will not allow any more fencing on the line. (UNI)