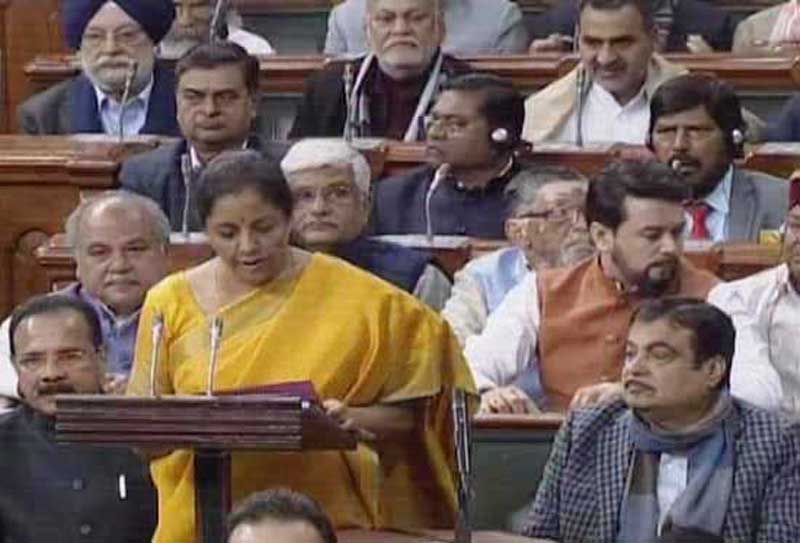 Customs duty imposed on many items, hiked on others; 1% TDS on e-commerce cos

* Govt to facilitate growth of MSMEs

NEW DELHI, Feb 1: Finance Minister Nirmala Sitharaman today slashed income tax for individuals, abolished dividend tax for companies and announced record spending in agriculture and infrastructure sectors to pull out the economy from its worst slowdown in more than a decade.

Click here to watch video
The cut in income tax rates, which would help save about Rs 31,000 a year in tax for persons with annual income of up to Rs 17 lakh, was however conditioned on current exemptions and deductions including standard deduction for Rs 50,000 as well as the waiver earned on payment of up to Rs 1.5 lakh in tuition fee of children, and contribution towards insurance premium and provident fund, being given up. Budget has both vision, action: PM Asserting that the Union Budget will accelerate the economic growth, financially empower every citizen and strengthen the foundation of the economy in the new decade, Prime Minister Narendra Modi today heaped praise on it for having both “vision and action”.
He also said provision of faceless appeal, new and simple structure of direct tax, move towards unified procurement system, stress on disinvestment are some of the steps which will reduce the Government out of people’s lives and will enhance their “ease of living”.
“I believe that this budget will increase income and investment, increase demand and consumption, bring new vigour in the financial system and credit flow,” he said
The budget, Modi noted, will meet the current needs of the country as well as the future expectations in the decade.
“The new reforms announced in the budget will work to accelerate the economy, financially empower every citizen of the country and strengthen the foundation of the economy in this decade,” Modi said in his comments.
Noting that the main areas of employment are agriculture, infrastructure, textiles and technology, he said the four have been given great emphasis in the budget to increase employment generation.
Referring to the Government’s efforts to double the income of farmer, he said 16 action points have been created which will serve to increase employment in rural areas.
Integrated approach has been adopted for the agriculture sector in the budget, which along with traditional methods will increase value addition in horticulture, fisheries, animal husbandry and also increase employment, he said.
“Under the Blue Economy, the youth will also get new opportunities in the field of fish processing and marketing,” Modi noted.
According to the World Bank, the blue economy is the sustainable use of ocean resources for economic growth, improved livelihoods, and jobs while preserving the health of ocean ecosystem.
The Prime Minister said new mission for technical textile has been announced. Man-made fibre has been reformatted into the duty structure of its raw material to be produced in India. This reform was in demand for the last three decades, he pointed out.
Referring to the Ayushman Bharat scheme, Modi said it has given a new expansion to the health sector of the country.
“In this sector, there has been a lot of scope for human resources – doctors, nurses, attendants as well as medical device manufacturing. New decisions have been taken by the government to increase it,” he said.
The Ayushman Bharat Yojana, also known as the Pradhan Mantri Jan Arogya Yojana (PMJAY), is a scheme that aims to help economically vulnerable Indians who are in need of healthcare facilities.
Prime Minister Modi had rolled out the scheme in September 2018.
He said in the budget, the government has made several special efforts to promote employment generation in the field of technology.
A number of policy initiatives have been taken for areas such as new smart cities, electronic manufacturing, data centre parks, biotechnology and quantum technology.
He hoped that India will move strongly towards becoming an integral part of the global value chain.
He pointed out that new and innovative initiatives have been announced regarding skill development of youth.
“For example, apprenticeships in degree courses, internships in local bodies and provision of online degree courses. Bridge courses are also being arranged for young people from India who want to go abroad for jobs,” he said.
Modern infrastructure is of great importance for modern India, he said, adding that the infrastructure sector is also a large employment generator. “Construction of 6,500 projects from Rs 100 lakh crore will increase employment opportunities in a big way. The National Logistics Policy will also benefit trade, business and employment. In the field of infrastructure, we will give new power to youth energy through start-ups and through project development,” he said.
Describing investment is the biggest driver for employment, he said some historical steps have been taken in this direction. (PTI)

Simplified GST return from Apr
A simplified return format for GST is being introduced from April 2020, Finance Minister Nirmala Sitharaman said today.
In her second Budget presentation, the Finance Minister said GST has resulted in gains of Rs 1 lakh crore to consumers and removed inspector raj and also helped the transport sector.
“Average household now saves 4 per cent in monthly expense after the rollout of GST,” Sitharaman said, and added that the Budget for 2020-21 aims to fulfil aspirations of people. (PTI)

* Budget proposes new income tax structure for individuals willing to forego certain exemptions and deductions
* Under the new structure, income of Rs 5-7.5 lakh to attract 10 per cent tax, Rs 7.5-Rs 10 lakh 15 per cent, Rs 10-12.5 lakh 20 per cent, Rs 12.5-15 lakh 25 per cent, above Rs 15 lakh 30 per cent
* Income up to Rs 5 lakh to remain exempt from tax
* Bank deposit insurance coverage increased to Rs 5 lakh from Rs 1 lakh
* Dividend Distribution Tax at the hands of companies abolished; dividend to be taxed at the hands of recipients as per applicable slab
* Govt to sell part of stake in LIC through IPO
* Fiscal deficit for FY20 estimated at 3.8 per cent, up from 3.3 per cent projected earlier
* Fiscal deficit for 2020-21 projected at 3.5 per cent
* 2020-21 net market borrowing pegged at Rs 5.36 lakh crore
* Disinvestment proceeds pegged at Rs 1.20 lakh crore for 2020-21, up from Rs 65,000 crore in current fiscal
* Receipts estimated at 22.46 lakh crore, expenditure at Rs 30.42 lakh crore in 2020-21 based on nominal GDP growth of 10 per cent
* PAN to be allotted instantly on the basis of Aadhaar
* India fifth-largest economy, USD 284 billion FDI inflows during 2014-19
* Central Government debt reduced to 48.7 per cent of GDP in March 2019, from 52.2 per cent in March 2014
* Proposal to sell the balance Government holding in IDBI Bank to private, retail and institutional investors through stock exchanges
* Defence outlay pegged at Rs 3.23 lakh crore in 2020-21, up from Rs 3.16 lakh crore this financial year
* Railways to set up ‘Kisan Rail’ through PPP
* Krishi Udaan will be launched by civil aviation ministry on international and national routes
* Outlay for agriculture and allied activities pegged at Rs 2.83 lakh crore, Nabard’s re-finance scheme to be further expanded
* Agriculture credit target for the year 2020-21 set at Rs 15 lakh crore
* Viability gap funding for setting up hospitals in PPP mode under Ayushman Bharat
* Health sector and Swachh Bharat outlay pegged at Rs 69,000 crore and Rs 12,300 crore, respectively, in 2020-21
* New Education Policy to be announced soon
* Steps would be taken to enable sourcing external commercial borrowings and FDI in higher education
* National Police University and National Forensic Science University are being proposed
* Rs 99,300 crore outlay for the education sector in 2020-21 and Rs 3,000 crore for skill development
* Proposes ‘Investment Clearance Cell’ to provide ‘end-to-end’ facilitation and support, including pre-investment advisory, information related to land banks and facilitate clearances at Centre and state level
* Proposes a scheme focussed on encouraging manufacture of mobile phones, electronic equipment and semi-conductor packaging
* National Technical Textiles Mission proposed with a 4-year implementation period from 2020-21 to 2023-24 at an outlay of Rs 1,480 crore
* NIRVIK scheme being launched to provide for higher insurance coverage, reduction in premium for small exporters and simplified procedure for claim settlements
* Proposes to digitally refund to exporters duties and taxes levied at the central, state and local levels
* National Logistics Policy to be released soon, to create a single-window e-logistics market and focus on employment generation
* Delhi-Mumbai Expressway would be completed by 2023, Chennai-Bengaluru Expressway would also be started
* More Tejas-type trains will connect iconic tourist destinations
* High-speed train between Mumbai and Ahmedabad would be actively pursued
* The Government would consider corporatising at least one major port and, subsequently, its listing on bourses
* Rs 1.70 lakh crore outlay for transport infrastructure in 2020-21
* Urges states and UTs to replace conventional energy meters by prepaid smart meters in the next 3 years to give consumers the freedom to choose the supplier. Further, measures to reform Discoms would be taken
* Rs 22,000 crore outlay for the power and renewable energy sector in 2020-21
* Proposes to expand the national gas grid from the present 16,200 km to 27,000 km
* To deepen gas markets in India, further reforms will be undertaken to facilitate transparent price discovery and ease of transactions
* Policy to enable private sector to build data centre parks throughout the country soon
* Rs 6,000 crore outlay to the BharatNet programme in 2020-21
* Proposes a task force to recommend on women’s marriageable age
* Budget allocation of Rs 85,000 crore for Scheduled Castes and Other Backward classes, Rs 53,700 crore for Scheduled Tribes for 2020-21
* Amendments proposed in Companies Act
* Rs 30,757 crore allocated to Union territories of J&K and Ladakh
* Govt to ask RBI to allow MSMEs to restructure debt till March 31, 2021
* FPI limit in corporate bonds hiked to 15 per cent of outstanding stock, from 9 per cent
* New debt-ETF, consisting primarily of government securities, to be floated
* Proposes lower tax rates for cooperatives at 22 per cent with 10 per cent surcharge and 4 per cent cess. (PTI)