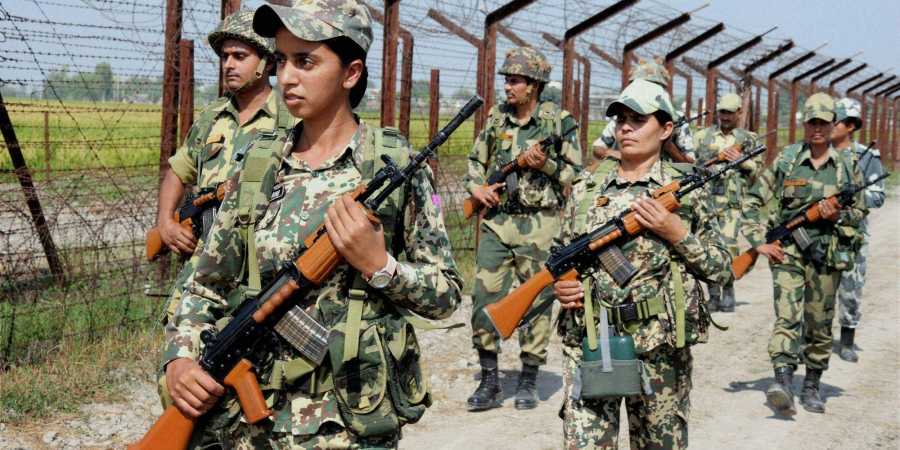 Financial security is the main factor for women joining the country’s largest border guarding force BSF in the constabulary rather than the desire to serve the nation, a first-of-its kind study has found.
The study, conducted by BSF official K Ganesh, also found that an overwhelming majority of women personnel working with the border guarding force have never experienced any major instances of sexual harassment at workplace.
The study is a maiden analytical attempt to understand issues faced by combat women in any of the central armed police forces (CAPFs), which have a “predominantly” male-oriented domain, and also the government’s policy decision to scale up their strength to 15 per cent of the total workforce.
Published in the latest journal of the national policing think tank-Bureau of Police Research and Development (BPRD) — it found most of the women constables do not have access to a lady doctor, they lack adequate rest during menstrual cycles and common usage of cuss words by male colleagues “offends” them.
The about 2.65-lakh personnel strong Border Security Force is tasked to guard the country’s two most important borders with Pakistan and Bangladesh apart from conducting counter-insurgency and anti-Naxal operations.
“The main reason for these women for choosing a career in the BSF appears to be financial security…more than 80 per cent have said that the reason for joining the force is for employment or for financial reasons.”
“Only 11 out of 55 said they are in the service for serving the nation,” the study accessed by PTI said.
More than 50 per cent of the respondents, according to the study, have said they will quit the service in less than 20 years and only 18 per cent want to serve till retirement.
“Majority of the respondents feel that their status in the community has gone up because of their joining BSF,” it said.
Liberal leave entitlement, access to health care for self and family, canteen facilities and other allowances compensate for the hard and risky job, it said.
A total of 55 women personnel posted in various border units were contacted for the survey-based study that sought their responses on issues like job satisfaction, sexual harassment, gender-based discrimination and subjects that stress and motivate them.
The force, that first recruited women constables in 2008, has a total of 4,147 (1.66 per cent of the total workforce) women personnel in various ranks with constables (the lowest combat rank) constituting the bulk at 3,322.
These personnel, the study found, “Are used in a limited way and are generally used for gate management, observation duty and patrolling with their male colleagues.”
“All duties are jointly performed with their male colleagues as assigning them duties independently is considered physically risky. High risk assignments like ambush and night duties in the border are not assigned to them,” it said.
The study also raises questions over the government’s recent directive to scale up the number of women personnel to 15 per cent in border guarding forces like BSF, Indo-Tibetan Border Police (ITBP) and Sashastra Seema Bal (SSB).
“The current strength of women combatants is around 3,500 (in BSF) and when it is scaled up to 15 per cent of the total strength it will be close to 30,000 women.
“The problem for the organisation would be how to maintain the operational efficiency when 15 per cent of the force has to be given soft jobs only,” it said.
It said the battalion commanders, who were interviewed during the study, feel that posting women only in locations classified as “soft” could likely become an issue of discontent among the male personnel.
Talking about issues related to sexual harassment at workplace, 54 personnel said they “never experienced any implicit or explicit request for sexual favours nor any remarks made at them about their physical attributes”.
“Fifty-one respondents said they have never been subjected to any sort of inappropriate touching or physical contact or any jokes of sexual nature directed at them,” it said.
At the same time, four respondents have experienced some sort of inappropriate physical contact and sexual jokes directed at them, it said.
The number could be more, the study said, as in the open-ended question a large number of women indicated some sort of verbally inappropriate behaviour and issues like staring.
“Fifty personnel said the existing mechanism for sexual harassment grievances redressal needs improvement and they are not satisfied with the current system,” it said. (PTI)