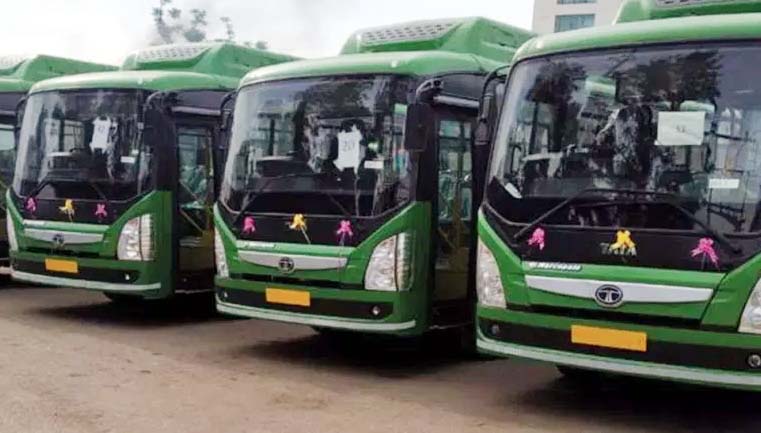 Governor likely to flag off fleet of vehicles by month end

Mohinder Verma
JAMMU, July 10: Finally, decks have been cleared for deployment of 34 fresh State Road Transport Corporation (SRTC) buses in erstwhile Doda district to overcome the problem of overloading in the private passenger vehicles, which is considered as major reason behind frequent tragic road accidents.
Moreover, a High-Level Committee headed by Administrative Secretary of the Finance Department has suggested alternate option for the revival of SRTC and to make it economically viable and self reliant.
The EXCELSIOR in its editions dated March 18, 2019 and July 2, 2019 had exclusively highlighted that only 14 buses of State Road Transport Corporation are plying in mountainous districts of Doda, Kishtwar and Ramban against the actual requirement of nearly 100 vehicles thereby leading to uncontrolled overloading in the private passenger vehicles and tragic road accidents.
It was also mentioned in these reports that there are 10 new routes in Ramban, 22 in Doda and 26 in Kishtwar for which no SRTC vehicle has been deployed although requirement of 10 for Ramban, 26 for Doda and 29 for Kishtwar was projected officially long time back.
Now, decks have been cleared for deployment of at least 34 fresh SRTC vehicles in these districts by the end of current month as State Motor Garages, which was assigned the task of procurement of buses for the SRTC, has been conveyed by the Tata Motors that delivery of the vehicles will be made most probably on June 25, 2019, official sources told EXCELSIOR.
Tata Motors was selected for procurement of buses as it fulfilled all the specifications forwarded to State Motor Garages by the SRTC, sources further said while disclosing that State Motor Garages was approached for procurement of buses through its own mechanism after tenders floated by the SRTC failed to yield the desirable results.
With the deployment of 34 fresh SRTC vehicles the number of Corporation vehicles in Doda, Kishtwar and Ramban will increase to 48 and help in checking overloading of private passenger vehicles up to large extent. Even the routes have been identified for operation of new buses, sources said, adding “Governor Satya Pal Malik is likely to flag off the fleet of vehicles for erstwhile Doda district by end of current month”.
Meanwhile, a High Level Committee headed by Administrative Secretary, Finance Department and comprising of Administrative Secretaries of Transport, Planning, Development and Monitoring Departments and Managing Director of J&K State Road Transport Corporation has submitted its report to the Advisor to the Governor, K Skandan mentioning the best suited option/model to make SRTC economically viable and self-reliant, sources said.
The High Level Committee was constituted vide Government Order No.327-GAD of 2019 dated March 5, 2019 with the direction to examine and suggest options to infuse new lease of life in the Corporation within a period of three months.
The committee deliberated on several options but finally put weight behind Build Own Operate and Transfer (BOOT), a model in which an organization conducts a large development project under contract to a public-sector partner such as a Government agency.
Even the High Level Committee has suggested the name of Indian Telecom Industry (ITI), India’s first Public Sector Unit (PSU) having expertise in diverse range of Information and Communication Technology products/solutions, sources informed, adding soon after the clearance of proposal by the Advisor to the Governor K Skandan, J&K State Road Transport Corporation will decide terms and conditions with ITI.
They revealed that Indian Telecom Industry will provide all support to the SRTC in proper management of its fleet and workshops besides extending help in rolling out e-ticketing facility and installation of Global Positioning System in SRTC vehicles. “All these measures will go a long way in making the Corporation economically viable and self reliant”, sources claimed.
It is pertinent to mention here that at present SRTC has fleet of 444 vehicles and only 60% of such vehicles are in operations and this is considered as major road-block in generating maximum revenue for the Corporation.
When contacted, Director State Motor Garages Z H Choudhary confirmed that Tata Motors has made commitment to deliver vehicles by July 25, adding “34 vehicles are meant for erstwhile Doda district and two for Gurez valley”.
Managing Director of J&K State Road Transport Corporation Bilal Ahmed Bhat while admitting that High Level Committee has submitted its report to the Advisor K Skandan said, “all out efforts are being made by the Governor’s Administration to infuse new lease of life in the Corporation”.