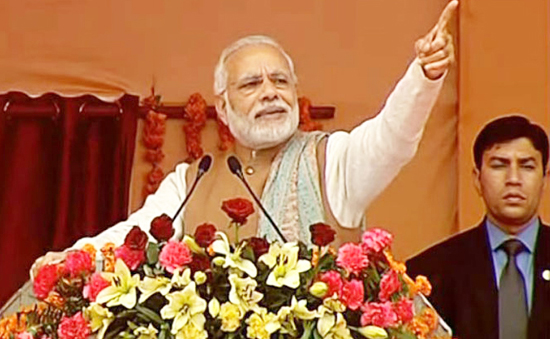 LUCKNOW, Jan 2:
Prime Minister Narendra Modi today attacked the Opposition for opposing his demonetisation move and said his fight against black money and corruption would continue with more vigor and strength claiming that a BJP Government in Uttar Pradesh will lead to a new era of development in the country.
“They say remove Modi, I say remove black money, they say remove Modi, I say remove corruption. You decide what we want to remove,” the Prime Minister said, asking the people to support the BJP in a big way in the assembly elections so that the era of development is unleashed in the state which is on ‘exile’ for the past 14 years.
“These opposition parties have become irrelevant in the present post-demonetisation scenario and I promise that corruption and black money will be rooted out from the country,” he said addressing a maha parivartan rally at the Rama Bai Amedkar ground.
Hitting out at the Opposition for opposing the demonetisation move, he said, “Have you ever seen BSP and SP together? When BSP says sun is rising, SP will say sun is setting. But both agree on ‘Modi hatao’ as demonetisation has hit both of them.”
Asking the people to vote for development, forgetting all caste and creed besides giving a full mandate to BJP, Mr Modi said without development of UP, India cannot be developed so it is required that this state goes for major development which had been eluded for the past 14 years in the absence of BJP.”
The election of UP is not just a win or loss for BJP but it is the responsibility for the party and its leaders to remove illiteracy, unemployment and poverty. It is a clear understanding that if you have to change India, you cannot ignore UP.”
“It is unfortunate that development is not priority for the rulers in UP nowadays and only corruption and goondaraj have been prevailing,” he said.
“Our high command is the people of India. We have no other high command other than 125 crore people.”
The Prime Minister was enthused with the crowd and even claimed that it was the biggest ever rally he has addressed in his life.
This rally was the first in  2017 and after his 50-day deadline after demonetisation. Mr Modi focused his speech on UP matters and the coming assembly polls in the state.
Targeting Dalits and BSP supremo Mayawati, he criticised the BSP for raising objection on naming the mobile app as BHIM. “Dr Bhimrao Ambedkar was a visionary person who knew all about finances and Indian economy. If we have launched an app on his name why others should have pain.
We want that every household in the country have this app and remember the contribution of the great leader,” he said.
Mr Modi also paid tributes to  Dr Ambedkar and his wife Rama Bai at the rally ground before starting his speech. (UNI)