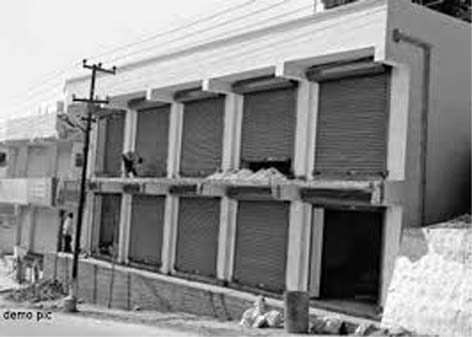 In the burst of initiating developmental activities of the likes of raising of multi -crore commercial complex at BC Road Jammu, planners and project conceivers very often take liberties with the critical aspect of economic feasibility. The same appears to have taken place in respect of the said complex which is nearing its completion at General (old) Bus Stand .Initially with an aim to decongest the area and resolve to a larger extent, parking problem of the vehicles , this complex was planned to come up but as on date, it is feared that it may not turn out to be an overall fruitful venture which instead of behaving commercially and giving dividends , may on the contrary, require subsidies in large amount for sustenance and maintenance. The reason is that its two floors exclusively earmarked for the multi brand stores, restaurants, eating shops etc should have by now, been “overbooked” instead are finding no takers. The reasons are many among which reigns high, is the price factor which is unjustifiably on the higher side. The simple rule should have been remaining content with the ruling economic behaviour of the goose giving the ” golden egg” each day instead of aspiring for many simultaneously.
The prime consideration which should influence decisions taking process, conceiving a project and drawing lines of its structure, plan and execution thereof should rally behind the optimum use and return of the money spent as that was the tax payers’ money. How that was to be utilised best and ensuring the same is directly related to the levels of the efficient professionalism and meticulously made comprehensive project reports. Surveys, collecting data , demand and opportunities like basics needed to be subjected to detailed analysis, pruning, modifications and experts’ acquiesce instead of believing in “fare wind and calm seas”. We, however, do not appear to be in know of whether that process has been given more than one chance to go through to repair the initial “oversights” or not.
On the face of it, the project seems quite promising in that the biggest problem faced in terms of traffic and roads in Jammu is about unplanned, messy, haphazard and at will parking culture of vehicles. This complex was thought of resolving that problem to a larger extent in an area where without parked vehicles, nothing practically is seen. The area being vulnerable due to security reasons, it is imperative that a bare minimum number of vehicles were parked on the road. Multi level car parking in the complex promises to resolve the parking problem of this particular area to a larger extent but the complex appears to be encountering rough weather. The Bus Stand otherwise was in dire need of getting renovated and changed on modern pattern and the project started by the Jammu Development Authority for building a double height bus terminal with 80 or odd bus bays and all the five floors were identified for different associated utilities. Resources both from within the JDA and the UT Government have been utilized in it but the main commercial aspect of it, viz the investments in floors earmarked for shops and other utilities are, as on date, appearing to be paying no dividends as takersare nowhere to be found.
Should the JDA authorities review its price structure to motivate aspirant parties to take the shops etc, depends upon the time factor as presently under the impact of COVID pandemic economic backlash, real estate concerning matters in terms of buying, selling and leasing out are postponed, deferred or even cancelled. However, the reason of present conditions being at the root of it could be true of now only and not as of a year or two back which is revealed by the outcome of the auction held in 2018 which proved as a damp squib. The solution to the investment concerning impasse lies in modifying the basic price rate and rent per square feet and the revision of the rent periodically which should find favour with the investing parties. That appearing to be the only solution, as of now, should be thought about to ward off the entire project which is getting complete in all respects shortly, from becoming a white elephant to be fed with scarce economic resources.