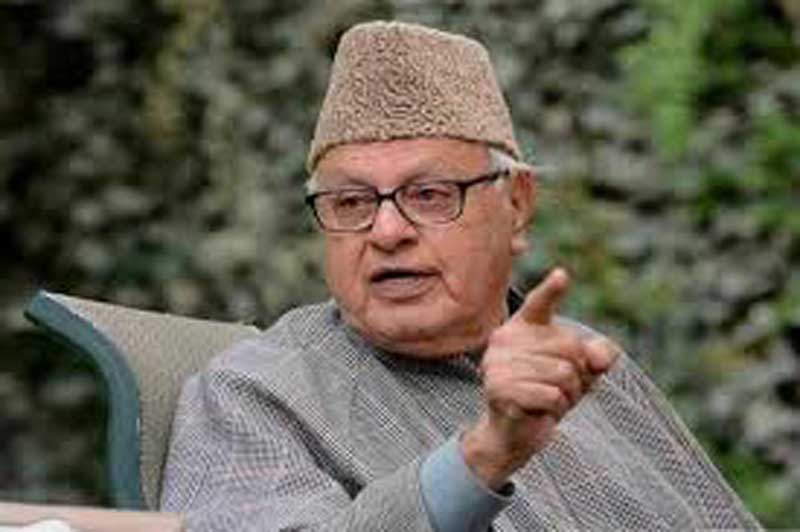 Fayaz Bukhari
SRINAGAR, Aug 4: National Conference president and former Chief Minister Dr Farooq Abdullah has invited leadership of mainstream political parties for a crucial meeting at his residence here on August 5.
Few mainstream leaders told Excelsior that they received invitation from Dr Abdullah for a meeting at his residence with an aim to deliberate over the prevailing political mess across J&K since August 5, 2019. They said that during the meet the future strategy about how to retrieve special status of J&K is on agenda.
The meeting at Dr Farooq Abdullah’s residence at Gupkar will start at 11 am. Many political parties including National Conference (NC), People’s Democratic Party (PDP), Congress, Awami National Conference (ANC), CPI (M), PDF, Peoples Conference (PC) and J&K Peoples Movement have been invited. However, BJP and Apni Party led by Altaf Bukhari have not been invited.
A senior leader said that besides Dr Abdullah, former Chief Minister Omar Abdullah, MPs Justice (retd.) Hasnain Masoodi and Mohammad Akbar Lone, Dr Sheikh Mustafa Kamal, Muzaffar Shah, Ghulam Ahmad Mir, Mohammad Yusuf Tarigami, Sajad Lone and Dr Shah Faesal are likely to attend the meet.
However, authorities have deployed police and other paramilitary forces personnel in strength in and around the residences of political leaders ahead of first anniversary of abrogation of Article 370 and Government is likely not to allow the meeting to happen.
J&K Peoples Conference today convened an online meeting of its executive committee in which the party asserted that decisions taken on and after August 5 are not acceptable to people. These decisions have been thrust on the people of Kashmir and are bereft of any acceptance or legitimacy amongst the masses.
“We believe, for us, August 5, 2019 is a negative milestone. This will be remembered as a sad day, a day of disempowerment a day of attack on our identity. It was a spiteful move and the most unfortunate aspect of it was that an unsuspecting population across the country fed on a diet of hatred and intoxicated on jingoism actually endorsed this spiteful move against the people of Kashmir. We want to tell the people not to despair. Nothing is permanent in politics. Grandeur of power, delusions of invincibility eventually fade into oblivion. There is enough empirical evidence across the world that such changes thrust against the wishes of people have a limited shelf life. It will better for the government of the day to accept realities and see the clearly visible canary in the coal mines. Otherwise, a time will come when future generations perhaps will agree with us and hold the current dispensation in odium and contempt for institutional demolition in Kashmir”, the executive committee unanimously stated.
A statement issued by the PC said that its leadership termed August 5 actions as a travesty of justice that strike at the very root of the state’s constitutional relationship with the Union and a blow to collective psyche of the Kashmiris, robbing them of their sense of identity and dignity.
“The unconstitutional and undemocratic decisions taken by the Parliament on and after August 5, 2019 served as a death warrant for democracy and completely eroded space for mainstream politics in Kashmir. The harsh treatment meted out to the people who have advocated and championed for democracy has left them red faced and humiliated. They are now being rendered to helpless mute bystanders while non locals decide on the fate and destiny of the inhabitants of J&K. This whole exercise is meant to alter unrecognizably the destiny of the people of Kashmir. And now it seems certain that Delhi is keen to push the Kashmiris to the wall. The damage being inflicted is irreversible”, the statement added.
The Communist Party General Secretary, M Y Tarigami, today said that Prime Minister Narendra Modi and Union Home Minister Amit Shah justified and defended the decision on the floor of the House, that abrogation of Article 370 would end decades-long militancy, separatism and corruption in the region and bring development, jobs and prosperity to the region. “However, one year down the line, promises proved to be a mirage and the claims a hoax. None of their claims pass the test of reality. If violence has really come down and the security scenario has improved, then why does the administration resort to a muscular approach of silencing the voices of the population yarbitrarily booking its people and detaining youth under draconian laws like UAPA, Public Safety Act”, he said.

Curfew lifted, curbs to continue
District Magistrate (DM) Srinagar, Dr Shahid Choudhary, today ordered lifting of curfew, which was imposed last night for 48 hours in the district but restrictions will remain in force.
The curfew was lifted after the situation remained incident-free today. “Existing restrictions on public activities and movement put in place since 1st August in view of the COVID-19 situation in the district
– where a sharp spike in affected cases has been witnessed in the last one month or so – will remain in force though,” the DM said.
In an order issued today, the DM stated that after assessing the situation which remained incident-free, it has been decided to lift curfew.
The order, however, stated that restrictions ordered earlier under Section 144 of CrPC and the Disaster Management Act in view of the prevailing situation due to COVID-19 disease will remain enforced across the district as directed through an order issued on 31st July. It stated that there shall be restrictions on public movement including transport and that commercial and other establishments shall remain closed.
Meanwhile, the DM has said that avoiding public gatherings are an important part of the efforts to contain the spread of COVID-19 and urged the general public to ensure strict compliance with all preventive guidelines and protocols the Government has issued in regard to it. He has directed for strict adherence to restrictions.
And curfew remained in force today and no movement except for essential services was allowed in Srinagar and other parts of Kashmir.
Para-military troops and police was heavily deployed in the streets of Srinagar and other major towns to prevent movement of the people and vehicles.
The main roads were blocked with concertina razor wire and iron barricades to prevent movement. People were not allowed at the barricades except those who were on COVID duty.