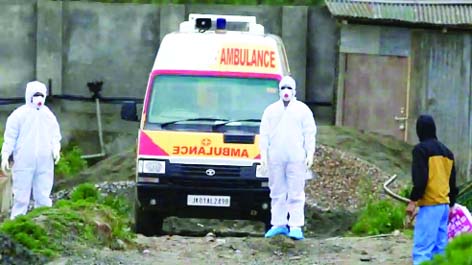 In COVID times
Satwant Singh Rissam
J&K is doing far better than other states on controlling corona virus. It is understandable that it is result of the so called ‘war’ against corona pandemic by the government administration in Jammu and Kashmir. While doing this, the administration failed to prepare a full plan for those who fell to this deadly infection. The administration was completely unsuccessful to perform for this public cause as the families of COVID-19 victims didn’t just deal with death of their near and dear ones but also social embarrassment caused to them. We all saw how the family members of victims were denied place at cremation grounds in Jammu to perform the last rites. Initially, a case came when the family members had to run from pillar to post for cremating the mortal remains at Jogi Gate crematorium. It all started after local residents led by councilors didn’t allow cremation to take place at Jogi Gate. Such was the state of affairs that the body of the deceased was taken back to the mortuary of the GMC, Bakshi Nagar. Next day, body was consigned to flames at Shastri Nagar cremation ground. When this victim was denied a dignified cremation, nobody in government administration stood against this episode although it reflected their failure. A cross section of people in Jammu expressed their grave resentment over this incident but this too didn’t move anyone in the local administration.
This lack of empathy in government officers led to denial of cremation place to another COVID-19 victim in Domana cremation ground. We all know the corona virus has struck fear in the minds of people, but in Domana area humanity was ashamed as family members had to leave with the half-burnt body of the victim. By now negligence on the part of the government administration was clear and loud but administrative lethargy further aggravated the miseries of others. Still nothing was done on humanitarian grounds by identifying proper cremation place in order to provide dignified rites to those who succumbed to COVID-19. Result of all this was another incident that took place in Sidhra where during the cremation two relatives of the victim died after falling unconscious before the pyre of victim was consigned to flames. This all happened due to lack of proper amenities and inattention on part of concerned government officers.
This third case where two more deaths happened was the most unfortunate incident. These two innocent lives were simply sacrificed as no one at helm of affairs in past three months bothered for every COVID- 19 SOPs. The administration here is claiming to follow all SOPs yet they couldn’t ensure to identify a place for burial/ cremation. These deaths and events which followed it reflect that attention was paid to some SOPs and as per administrative convenience. The people responsible in administration in years to come wouldn’t be able to wash the sins committed by humiliating the dead in Jammu. In order to prevent any untoward incidence during last rituals, it was the most important part of plan against COVID- 19 nonetheless the step was taken after seeing so much. When this all started the concerned officials without wasting time should have taken action. But sadly after experimenting on emotions of public now the Chief Secretary has directed all Deputy Commissioners in J&K to identify cemetery/cremation grounds exclusively for COVID-19 victims.
All the concerned officials shouldn’t just run after the statistics for daily official bulletin because it won’t count for public cause. All that is required is a human heart with compassionate approach for the dead which we saw were missing in Jammu. Nothing was done to show any kindness in these difficult times to those who were infected and later died. Hereafter, with latest direction by Chief Secretary a hope is generated that such incidents will stop forever. Nevertheless, it is required that some accountability should be fixed for all these mishandlings and justice be delivered to all who suffered this humiliation due to some government officials. The Lieutenant Governor should personally make sure that these matters are taken to logical conclusion in order to set the system right for days ahead. The tough decision should be taken against ‘tricky decision makers’ so that some moral relief is delivered to those who suffered for no fault of theirs in this ongoing pandemic.
feedbackexcelsior@gmail.com