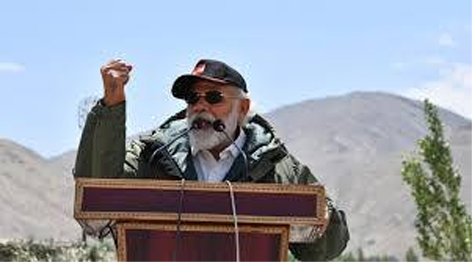 In an era of development and cooperation between the countries, there was no scope or veracity for any reason whatsoever, to nurse expansionist ambitions by any country. Era of cold war had ended and other treaties of promoting military and war interests have been rendered infructuous and redundant. Economic interests and reforms to promote globalisation with intent to focus on development, progress and expansion of trade and commerce, fighting ecological and environmental problems, issues of emissions and fighting terrorism are getting countries closer. If any country believed that its die hard old state policy to usurp neighbours’ land would get any sort of support or any stamp of legitimacy, it was only day dreaming and at least, should not dare to do it with a country intrinsically believing in and pursuing policy of peace and friendship. The crux or kernel of the impressive speech of Prime Minister Narendra Modi which he delivered during his unannounced visit to Ladakh recently revolved around these facts.
A historic and memorable visit of the PM in the middle of a highly tense situation due to belligerency of China was not without a purpose of its peculiar nature as he echoed in no ambiguous manner that era of expansionism was over and that the era of development had attained due importance and centre stage of all the countries’ policies. He also lauded the valour and professional spirit of fighting back by Indian soldiers and paid rich tributes to the soldiers who attained martyrdom while resisting and giving a bloody nose to the Chinese on 15th of this month by what he said as the enemies of India had seen their “fire and fury”. India of the present era, especially of 2020 would never allow or tolerate any misadventure of transgression of its territory. It has to be underlined that the weak could never succeed in building a lasting peace and it was only the powerful and the brave which could do it. In other words, he reiterated that India’s strength should never be underestimated or undervalued which was seen in symbolic display of bravery of our forces on June 15. India was making no bones about its high military preparedness and acquiring military hardware of latest technology to be used on ground, in the air and in seas only to defend its territories. The PM while addressing the soldiers told that “your bravery and valour are echoing in every house across the country.” He made it clear that Ladakh is the crown of India and that “we know how to defend our land”. The PM did not lose the opportunity in praising the valour and contribution of ITBP, BSF, BRO and other para-military forces.
As is often noticed that the PM usually highlights India’s great traditions and legacy and analogically connects those with day to day happenings to bring home India’s high ideals which were meaningfully relevant to resolve contagious issues. That Indians were worshipping the flute of Lord Krishna symbolic of peace, love and compassion were also ardent worshippers of his Sudarshan Chakra denoting fighting the evil to its finish. So the ardent principle of peace to which this country was traditionally and culturally wedded to should never be construed as India’s weakness. It may be noted that even during the intense standoff at the LAC, India has been getting increasing international support which was a message to China that unprovoked and illegitimate hostilities with ulterior motives to usurp and nibble others’ territory would never ever get any type of support from any country. The injured soldiers also were inquired about their wellbeing by the Prime Minister by meeting them at Leh hospital, and were recovering fast.
However, the present leadership in China stepping up its aggressive postures against this country has attracted worldwide attention especially in constantly avoiding or resisting India’s continued efforts to honour the LAC that could ensure a lasting peace. Back home, those of his critics who took a jibe at the Prime Minister that during his address to the nation two days back in respect of announcing free ration to the poor, he did not make any mention about China when the standoff with that country was peaking in eastern Ladakh, got a resounding response from the PM by his virtually landing at the front at an altitude of 11000 feet and sending message loud and clear to China though not naming it directly.