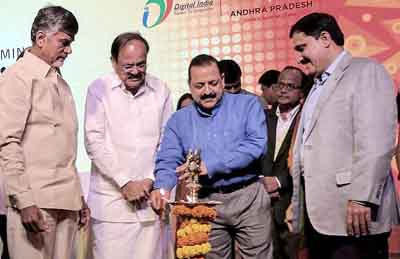 Excelsior Correspondent
VISAKHAPATNAM, Jan 9: Except certain opposition leaders, every Indian whole-heartedly supports Prime Minister Narendra Modi’s decision of “Re-monetization” and what is remarkable is that, for the first time in 70 years’ history of independent India, a government initiative has become a peoples’ movement against blackmoney.
This was stated here today by Union Minister of State (Independent Charge) for Development of North Eastern Region (DoNER), MoS PMO, Personnel, Public Grievances, Pensions, Atomic Energy and Space, Dr Jitendra Singh while briefing the media after the inaugural function of two-day National Conference on the theme “Transforming India through e-Governance”. The conference is being organized by the Union Ministry of Personnel (DoPT & ARPG) of which Dr Jitendra Singh is the Minister-in-charge.
Senior Andhra leader and Union Urban Development Minister Venkaiah Naidu and Andhra Pradesh Chief Minister Chandrababu Naidu were the main guests at the inaugural ceremony.
Dr Jitendra Singh recalled Prime Minister Narendra Modi’s statement committing “maximum governance, minimum government” soon after formation of the government and said, e Governance is, for us, a means to achieve the objective of ensuring transparent, accountable governance which functions with participation of citizen and with citizen-centricity as its focus. Considering this, he said, one of the earliest decisions taken by the government was to abolish attestation of certificates by gazetted officers and this was soon followed by another path-breaking decision to abolish interviews for appointments to junior level posts. Even though all the Central Ministries and Departments have complied with the decision to abolish interviews, it is regretful that some of the State Governments are yet to take the cue, he added.
Dr Jitendra Singh also disclosed that the current two-day conference being held in Visakhapatnam will be symbolic also because it is going to be totally “paper-less” since all the books and literature released during the conference are being provided to the delegates on an “e-Tablet”. He appreciated the Andhra Pradesh Government and Chief Minister Chandrababu Naidu for having come forward to collaborate in organizing this conference and said, Andhra Pradesh has always been one of the role model States in switching over to latest technology and digital methods of working.
Venkaiah Naidu described Prime Minister Narendra Modi as a man who believes in development and said the word “MODI” stands for “Making of Developing India”. He said, people have faith in the Modi government and that is why, they are fully cooperating with the campaign against black money.
Earlier, Chandrababu Naidu, during his address, referred to the new experiments in the field of e-Governance and digital technology that have been tried from time to time in Andhra Pradesh and recalled that it was during his tenure nearly 20 years ago that the concept of “Cyberabad” was born which gave value addition to the twin-cities of Hyderabad and Secunderabad.
Y.S. Choudhary, Union Minister of State for Science & Technology and also a Member of Parliament from Andhra Pradesh, appreciated the decision of the Union Ministry of Personnel to hold this important conference at Visakhapatnam.
Union Secretary ARPG C. Viswanath presented a resume of the Government of Indian’s recent new initiatives in e-Governance. He also spelt out a broad outline of the academic sessions on different subjects planned during two days of deliberations in the conference. Union Secretary IT Aruna Soundararajan and Additional Secretary ARPG Usha Sharma also spoke on the occasion. 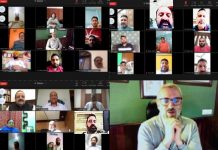 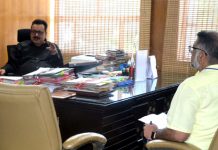