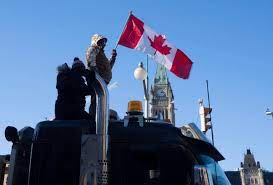 Toronto, Feb 6: A former US Ambassador to Canada said Saturday groups in the U.S. Need to cease interfering in what many call an occupation in Canada’s capital as protesters opposed to vaccine mandates and COVID-19 restrictions held rallies in cities across the country in a show of solidarity with a week-long demonstration in Ottawa.
“Under no circumstances should any group in the USA fund disruptive activities in Canada. Period. Full stop,” Bruce Heyman, a former US Ambassador under President Barack Obama tweeted.
After crowdfunding site GoFundMe said it would refund or redirect to charities the vast majority of millions raised by demonstrators protesting COVID-19 measures in the Canadian capital prominent U.S. Republicans like Florida Gov. Ron DeSantis complained.
“It is a fraud for @gofundme to commandeer $9M in donations sent to support truckers and give it to causes of their own choosing,” DeSantis tweeted.
He added he would investigate these deceptive practices and donors should be given a refund. But GoFundMe already changed its mind and said it would be issuing refunds to all. GoFundMe said it cut off funding for the organizers because it had determined the effort violated the site’s terms of service due to unlawful activity. Ontario Premier Doug Ford called the protests an occupation.
Texas Attorney General Ken Paxon tweeted “Patriotic Texans donated to Canadians truckers’ worthy cause.”
In Canada’s largest city, Toronto, police set up road blocks throughout downtown, preventing any protesters in trucks or cars from getting near the provincial legislature which is near where five major hospitals are located. And police later moved in to clear a key intersection in the city.
Thousands descended in Ottawa again on Saturday. Participants roasted hotdogs and doled out baked goods under tarps, while two men on horseback traipsed through the town, one carrying a flag in support of former U.S. President Donald Trump. Residents of Ottawa are furious at the nonstop blaring of horns, traffic disruption and harassment and fear no end is in sight.
The “freedom truck convoy” has attracted support from Trump and many Republicans.
In Toronto a couple hundred health-care workers and supporters marched from the University of Toronto to hospital row just south of the legislature. They held placards reading, “free-dumb” and “N95 masks for all.”
Demonstrators also gathered in Quebec City, Fredericton and Winnipeg, with rallies also planned for Regina, Edmonton, Vancouver, Victoria and the U.S. Border crossing in Coutts, Alta.
Police forces in those cities say they have learned lessons from Ottawa’s predicament and have developed strategies designed to protect key infrastructure, such as vital traffic corridors and hospitals, and also prevent possible violence.
Police in Winnipeg, Manitoba laid charges against a 42-year-old Manitoba man who allegedly drove his vehicle into the group of “freedom convoy” protesters gathered in that city. They said the incident took place late Friday and resulted in three men being treated at the scene for minor injuries, while a fourth man was taken to hospital and released. The accused is facing multiple charges including assault with a weapon and dangerous operation of a conveyance.
“He wasn’t really for or against either of the general views,” Winnipeg Police Service spokesperson Const. Rob Carver.
Many Canadians have been outraged over the crude behavior. Some protesters set fireworks on the grounds of the National War Memorial late Friday. A number carried signs and flags with swastikas last weekend and compared vaccine mandates to fascism.
Protesters have said they won’t leave until all mandates and COVID-19 restrictions are gone. They are also calling for the removal of Trudeau’s government, though it is responsible for few of the measures, most of which were put in place by provincial Governments. (AGENCIES)