UDHAMPUR, Apr 10: Mocking the oft repeated statements of the Congress and other opposition candidates that they are unable to see any development happening in the last five years in the Udhampur-Kathua-Doda Lok Sabha constituency, Union Minister and BJP Lok Sabha candidate from Udhampur-Kathua-Doda Parliamentary constituency Dr Jitendra Singh said here today that the matter of fact is that even the Congress leaders’ native places got  roads, colleges etc only after 2014. During the current five – year parliamentary term, development was seen even in the native places of the Congress leaders, which had been neglected by them for reasons best known to them, he said.
Addressing a series of meetings at far-flung places like Basantgarh, Gordi, Landhar, Ukhral and other locations falling in the Udhampur, Chenani and Ramban Assembly segments, Dr Jitendra Singh asked that it is, in fact, we in the BJP who should be asking why, for example, Ukhral block comprising Pogal-Paristan suffered from inadequate education facilities for the last half-a-decade, even though its representatives were Deputy Chief Ministers in the State, Governors and Chief Justices, but the first Degree College was brought to this area only during the current Parliamentary term.
Similarly, Dr Jitendra Singh said, the Congress leaders owe to explain that even though their fathers and forefathers held important posts during the Indira Gandhi regime when Swamy Dhirendra Brahmachari had set up an Ashram at Man-Talai, but the same went into shambles after his sudden death and they never cared for it. It is only now, he said, after over 30 years, that the BJP Government has undertaken the task of bringing up a state-of-the-art Yoga and Health Centre at the same location, as a tribute to an icon called Dhirendra Brahmachari who had achieved his celebrity status with the Congress patronage.
Citing more examples, Dr Jitendra Singh said, till about five years ago, the Chenani Assembly segment was represented by Congress or other non-BJP MLAs, but the 50-year old demand for a road to Gordi was addressed only during the last five years, when a Centrally-funded road project was sanctioned by Union Ministry of Road , Transport & Highways, and the work is now in progress.
Continuing his retort, Dr Jitendra Singh said, while the Ramban Assembly constituency had been, till five years ago, represented by Congress and its allies, yet the long pending demand of a second bridge on river Chenab was fulfilled only during the last five years, through Central funds granted by the Modi Government.
As of now, Dr Jitendra Singh said, within the last two or three years, over Rs.10,000 crore Centrally-funded road and bridge projects have been initiated in the Udhampur-Kathua-Doda constituency, which is unprecedented in the entire 70-year history of independent India. In 2018-19 alone, the constituency received highest-ever Central PMGSY package of nearly Rs.2000 crore, out of a total Rs.3,800 crore sanctioned for the State. At the same time, he added, over Rs.11,000 crore of Central Road Fund projects were approved. As a result today, he said, there is a network of roads and bridges all across the constituency, which includes important bridges like Keediyan-Gadhiyal Bridge, Juthana Bridge, Devika Bridge, Beini Bridge, Udhampur-Ramnagar Bridge etc. All these bridges and roads, he quipped, are meant to provide connectivity to the native villages and towns of some of the most important leaders of Congress and its allies.
Not only this, Dr Jitendra Singh said, in these five years, we opened Post Offices in the native places of Congress leaders who had been Ministers for several decades and started Kendriya Vidyalayas in the native places of the opposition leaders who had been at the helm of power for several years.
MLA Ramnagar R.S. Pathania, MLA Chenani Deena Nath Bhagat and MLA Ramban Neelam Langeh accompanied Dr Jitendra Singh during this meetings. 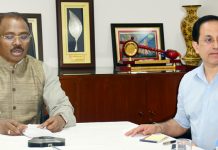 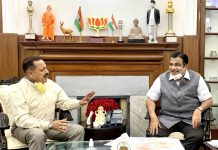 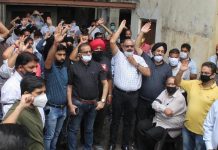