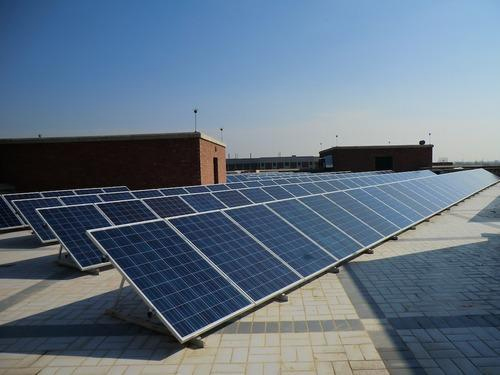 JAMMU, Sept 23: Substantiating the general perception that findings of the Comptroller and Auditor General (CAG) of India are not being taken seriously by the officers in Jammu and Kashmir, no attention is being paid towards the exposure of the supreme audit institution of the country regarding 128 non-functional solar plants at police establishments as a result of which expenditure of several crores of rupees has remained unfruitful.
Most shocking aspect is that several senior officers of the Jammu and Kashmir Police are even not aware of the observations of the Comptroller and Auditor General although they are supposed to take the corrective measures as recommended that too in a time bound manner.
The revelations in this regard were made by the Comptroller and Auditor General of India in its report tabled in the Parliament early this year and it was mentioned that Director General of Police in reply in June 2020 had stated that the non-functional Solar Power Plants (SPPs) could not be repaired as spare parts were impounded by the Taxes Department for non-payment of Work Contract Tax (WCT). He had assured the audit team that all the issues shall be resolved as soon as the Government releases the WCT amount or waives it off.
“The failure of the department to effectively co-ordinate and settle the issue regarding payment of WCT with the Sales Tax Department led to impounding of spare parts dispatched by the firm which resulted in non-functional SPPs”, the CAG had pointed out and stressed that payment of Works Contract Tax needs to be settled on priority and rectification of defects in the non-functional SPPs ensured immediately so that the investment made in SPPs is gainfully utilized.
EXCELSIOR contacted a number of officers of Jammu and Kashmir Police to ascertain the status of action taken on the findings of the CAG but they fanned ignorance about having gone through such a report. Even some officers of the Taxes Department said that they have not received any communication in this regard from the Jammu and Kashmir Police.
“Due to this, the expenditure of several crores of rupees has remained unfruitful and the objective behind the initiative of Union Ministry of New and Renewable Energy could not be achieved”, sources said.
The CAG had pointed out that in order to ensure uninterrupted power supply to police establishments in J&K, a proposal for Rs 37.94 crore to provide Solar Photovoltaic System for 523 locations by J&K Police was submitted in August 2011 to the then State Government for approval and onward submission to the Ministry of New and Renewal Energy (MNRE).
After only two days, a reworked proposal with a total financial implication of Rs 43.31 crore was submitted including additional 25 locations (District Police Offices). The MNRE under Central Financial Assistance (CFA) sanctioned in February 2012, Rs 33.54 crore towards installation of 523 Solar Photovoltaic Power Plants (SPPs) with aggregate capacity of 1,408.6 KWP at the establishments of Jammu and Kashmir Police.
In April 2012, Notice Inviting Tender (NIT) for the project was floated and the requirement of 523 locations was reworked to include left out 25 District Police Offices, 4 Police Stations and 10 Police Posts bringing the total number of locations to 562.
The lowest bidder quoted a price of Rs 36.14 crore (inclusive of taxes) for the project and the contract for supply, installation, testing, commissioning and maintenance of Solar Photovoltaic Power Plants of different capacities (aggregating 1553.76 KWP) for 562 locations was placed in March 2013.
As stated in Clause 16 of the NIT, Jammu and Kashmir Service Tax and Value Added Tax (VAT) was not to be applicable to this contract and would be paid extra by Police Department, if charged by State Taxes Department. The delivery, installation and commissioning of SPPs was to be completed within six months from the date of placement of the supply order.
As per the terms and conditions of the supply order, the supplier was responsible for free warranty of five years for SPPs, 10 years for power output warranty for Solar Photovoltaic (SPV) modules and replacement guarantee of 20 years for SPV modules. Under the scheme, the MNRE was to provide CFA of Rs 243 per watt or 90 per cent of the sanctioned project cost whichever is less.
The MNRE therefore reduced in June 2013 the CFA to Rs 29.43 crore based on the tendered cost of the project. The first installment of 50 per cent of CFA amounting to Rs 14.71 crore was released in June 2013 to the J&K Government out of which an amount of Rs 14.39 crore towards payment of 187 out of 252 SPPs installed was made during the period between May 2014 and January 2015.
Post installment of these 252 SPPs, 163 SPPs were found to be non-functional which included 128 SPPs for which payment of Rs 9.70 crore had been made. Accordingly, the department directed in August 2015 the supplier to rectify the defects developed in 163 SPPs. The supplier informed the department that instead of repairing old power conditioning unit of these SPPs, new power conditioning units were dispatched to Jammu and Kashmir.
The material was, however, detained by the Taxes Department on the ground of non-deposit of Work Contract Tax (WCT). However, audit scrutiny in July 2017 of records of Director General of Police revealed that the matter relating to WCT, however, was not resolved even after a lapse of more than five years and 128 SPPs have remained non-functional for which payment of Rs 9.70 crore was made up to January 2015.

PoK will be part of India in future: AoC-in-C WAC