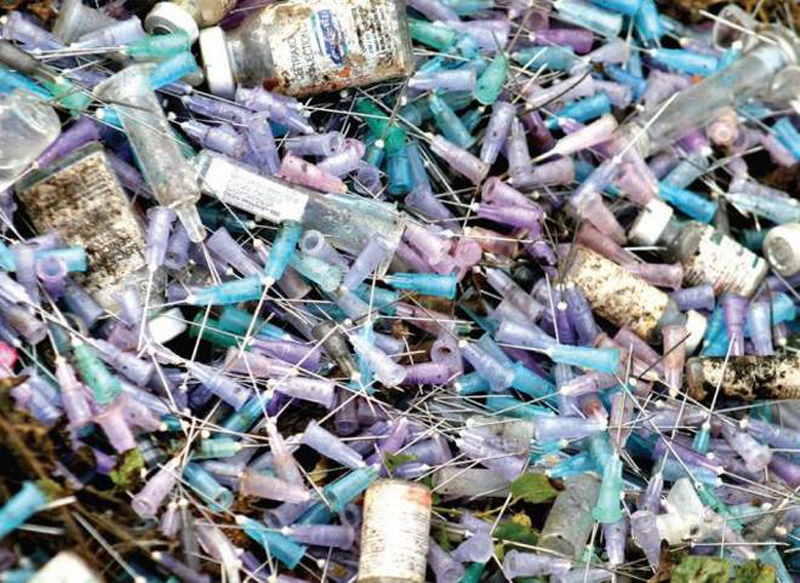 JAMMU, Dec 13: In a testimony to the administrative inertia, a major project approved by the Omar Abdullah Government of the erstwhile State of Jammu and Kashmir to establish two Bio-Medical Waste Treatment facilities, one each at Jammu and Srinagar, is still lingering on as the authorities have failed to identify land for these facilities even after more than seven years of the approval of this much needed project.
Official sources told Excelsior that there is no Common Bio-Medical Waste Treatment Facility in the Government sector in Jammu and Kashmir although there is constant rise in generation of bio-medical waste due to opening of more health institutions. At present, some quantity of bio-medical waste is being disposed off by three private players— Clean City Waste Management Company at Samurbugh (Lasjan), Kashmir Health Care System at IGC Lassipora and Anmol Health Care Facility at village Rakh Rara in Samba after charging money from the Health institutions.
Keeping in view the dire need of such a facility in the Government sector, the Union Ministry of Health and Family Welfare during the financial year 2013-14 had cleared a proposal for establishment of one each Common Bio-Medical Waste Treatment Facility in Kashmir and Jammu and subsequently adequate funds were released under the National Health Mission (NHM) scheme.
Sources said while chairing a high level meeting in Srinagar in September 2012, the then Chief Minister of J&K Omar Abdullah had also approved the proposal involving an expenditure of about Rs 7.40 crore to cater to the bio-medical waste generated in various Government and private hospitals in the State.
They said in last over seven years, Directorate of Health Services of Kashmir/Jammu identified land at various places including Bajalta, Kanachak and Surinsar in Jammu and Lasjan, Rakhi-a-Arth, Sheikhpora and Zewan in Kashmir valley for setting up these facilities due to non-clearance of these sites by the Pollution Control Board or objections raised by the local inhabitants, the work on these facilities could not be taken up.
“The delay in establishment of Common Bio-Medical Waste Treatment Facilities was also noted with serious concern by the Committee on Environment of Legislative Assembly (LA) for 2014-15 with the directions for expediting the process of setting up these facilities to ensure utilization of the funds made available by the Central Government”, sources said.
However, the dilly-dallying approach continued on the part of Directorates of Health Services and the directions of the Committee on Environment for 2014-15 remained unimplemented. Thereafter, the Committee in its report tabled on the floor of State Legislature on June 24, 2016 fixed time-line of one month for finalization of land after fulfilling all the requisite formalities with the PCB but even after over three years of the tabling of report on the floor of the Legislature, neither the Health and Medical Education Department could sort out the issue regarding NOCs with the Pollution Control Board nor identify the new sites.
Sources said the intensity of non-seriousness on the vital subject can be gauged from the fact that senior officers at the helm of affairs in Health and Medical Education Department, Revenue Department and PCB when contacted by this correspondent, expressed ignorance about the project.
However, Director Health Services, Jammu, Dr Renu Sharma and Director Health Services, Kashmir, Dr Sameer Mattoo, when contacted, informed that the land for the facilities was to be provided by the concerned Deputy Commissioners and they identified lands several times at separate places but those could not be finalized due to non-clearance by PCB.
Dr Sharma and Dr Mattoo said that within a day or two they are again going to send fresh communication to the concerned DCs urging them to identify the suitable lands so that constructed work may be stated at the earliest.