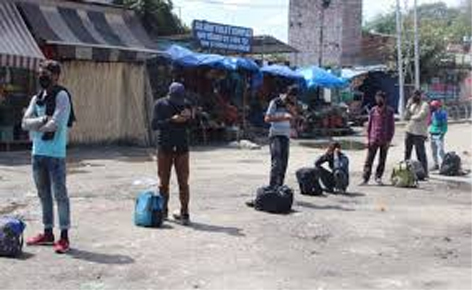 We have not only reports but have been receiving numerous calls at our news desks about several people from the UT of Jammu and Kashmir being stranded at several places in some Northern states of the country including the capital city of Delhi during the current lockdown period and have reportedly made several distress calls to the UT administration too for getting evacuated to their respective home towns. It is likely that due to shut down, many of them must have run short of money and must also be feeling difficulties about getting essentials like food, water, medicines etc. We have several migrant labourers stranded at the Railway Station and while some voluntary organisations etc are looking after their food, water and other basic minimum needs, more than 63 people from border towns of Rajouri and Poonch stranded at the station were sent back to their places in SRTC buses.
However, needless to add, the first and the foremost requirement of and making successful the purpose behind imposition of this lockdown is for everybody to remain where one presently was. Movement and contact had risks implicit of the corona virus getting spread very fast. Everyone, in one or the other form, was encountering difficulties due to the novel experience of remaining totally indoors on account of the shut down, the only remedy to keep the virus under tight check and finish its strength of spreading. We are sharing their difficulties and would urge the UT administration to contact the district authorities of respective places where these people are stranded to extend every possible help to them in case they obviously could not be moved therefrom as desired by them. However, apprehensions of extending of lockdown had to be discouraged to be thought about as a possibility.