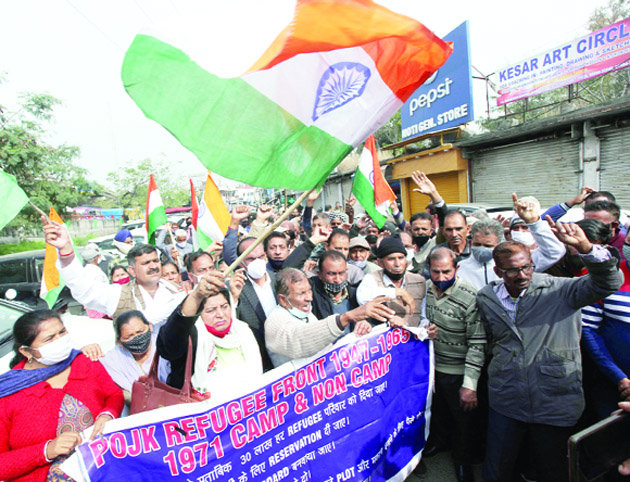 Dr. Satwant Singh Rissam
The Delimitation Commission under its final order on Jammu & Kashmir has recommended the nomination of displaced persons from Pakistan occupied Jammu and Kashmir (PoJK) in the Legislative Assembly of J&K. Initially, the Commission has ruled out de-freezing of 24 seats reserved for PoJK people in J&K under delimitation drive. And due to it all thought that political doors for these PoJK refugees are again closed. But this latest and unpredicted recommendation to the Union Government (made on the pattern adopted in the Legislative Assembly of Union Territory of Puducherry) once again has raised political hopes in this entire community waiting for political justice at the hands of successive governments. This recommendation made by the Commission appears to be the greatest step to empower PoJK refugees politically in J&K. The entire PoJK community feared that after the Delimitation, the benefits the central government had promised to Jammuites from dilution of Article 370 and 35A won’t reach them ever.
This step suggested in the favour of PoJK refugees seems to have come after various PoJK delegations fought with logic, commitment and integrity before the Commission that they even after 70 years are forced to live as refugees in their own country in absence of political empowerment. The truth is that it was not so easy for PoJK people to reach this milestone after 70 years. It’s difficult to put in precisely when politically things started to move in favour of PoJK people because in the erstwhile state of Jammu and Kashmir, 24 seats were kept vacant under the J&K Constitution for the natives of the PoJK in the J&K Legislative Assembly under section 48 of the J&K Constitution. In 2014, the Parliamentary Standing Committee on Home Affairs also recommended the de-freezing of eight ‘reserved’ seats for the PoJK community. It was also suggested that the Government of India should take up the matter of de-freezing these seats with the State Government and impress upon the J&K Government to make amendments in the J&K Constitution. But nothing was done to shut the debate.
For sure this should have been settled a long time back by the politicians who always promised to deliver results. Now the ball is in the central government’s court and hope remains that soon some sharp mind full of enthusiasm would settle this problem. Getting reservation in the assembly is like getting ‘last wish’ fulfilled because all these refugees were promised an amount of Rs 25 to 30 lakh but were paid only Rs 5.5 lakh and even the process of registration of PoJK refugees has been stopped. Finally to end this political flaw, the Government of India must act without further delay as assembly elections are due in J&K and this move will benefit BJP because the population of PoJK refugees in the J&K is estimated at 14 lakh, with nearly 7 lakh of them registered as voters settled in different assembly constituencies. That’s a pure reflection of the political weight this community holds in the Jammu region.
Moreover, while addressing the media in July last year J&K BJP chief Ravinder Raina said that they have demanded reservation for PoJK refugees by unfreezing the 8 assembly seats from the PoJK quota to give adequate representation to them in the assembly.
For BJP, challenge and opportunity stands together and now it is for them to take the political incentive or penalty. Entire PoJK community is now looking forward to the BJP led Government of India for collective justice and fairness to ‘change the world’ for them. Undoubtedly, without political empowerment the idea of fair democracy would be incomplete for PoJK people living here. There could be resistance to implement the recommendation of the Commission but the government this time is expected to play a decisive and historic role for the coming generation of this community and simply open gates for their future as well.