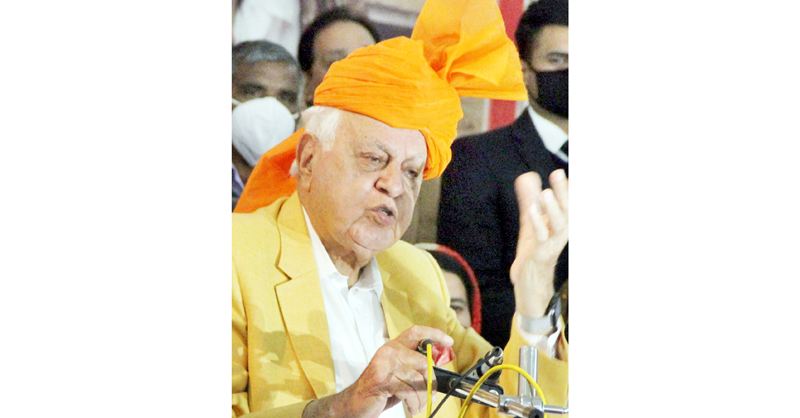 Decries use of religion for politics

Click here to watch video
“Lord Rama or Almighty Allah can never be in danger, the politicians may be”, Dr Abdullah said while addressing a day-long convention of JKNC SC Cell at Sher-i-Kashmir Bhavan here this afternoon.
He said religion is not to divide the people but to serve humanity and do well for all.
Dividing and discriminating the people in the name of religion is exploitation which has to be opposed, he said and expressed anguish over Scheduled Castes still being discriminated against in most parts of the country and deprived of their rights.
“Though a change has taken place due to reservation as a result of which the community can take pride in producing good doctors and engineers yet the backwardness and economic deprivation is still continuing, he added.”
Dr Abdullah exhorted the community to unite and take sagacious decisions during elections so that their elected public spirited representatives can bring about a desired transformation in their socio-economic and political emancipation. He said the National Conference has always espoused the cause of the community and ensured their participation in the decision making by getting their representatives in the Legislative Council. He regretted that the condition of the Scheduled Castes has not improved despite the nation getting independence nearly 75 years ago.
“I urge the SC community to unite under the banner of the National Conference to ensure their overall growth and progress”, he said and exhorted them to identify honest representatives who can be mandated for elections. He said elections are going to be held and it is only a matter of time.
The National Conference president also referred to the poverty and exploitation of the poor over seven decades ago, saying it was his party that took pioneering and revolutionary measures by making tillers owners of the holding they were toiling with their sweat and blood. He said the people had been enslaved and the dignity of women was in jeopard.
Reiterating his concern about curbs to the media for reporting freely and objectively, Farooq wondered over the Government response that nothing like this is happening or any order having been issued to impose curbs on the media. He said this is yet another lie being spread by the Government as the media persons know what they face for writing the truth, which at times is against the interest of the executive. He said Editors of some media houses have told him what they are made to face for writing the truth. He said the day is not far when the Government will be shown the mirror about muzzling the press.
Dr Abdullah also reiterated that the people of Jammu and Kashmir will peacefully seek restoration of their snatched rights. He said the people are yearning for getting their rights back. He also referred to growing unemployment among the educated unemployed including doctors and engineers and said that he had taken up the issue of engaging the local skilled and unskilled workforce in various projects during the visit of Union Surface Transport Minister Nitin Gadkari in SKICC Srinagar.
He said the poor people of J&K also deserve sustenance, which is being denied to them. Not only this, the people from other States are brought to deprive locals of their due, he added.
The NC president also highlighted the crucial role of women in bringing about transformation and harmony in the society and urged them to come forward and contribute towards this objective.
He exhorted the cadre to strengthen the National Conference at the grassroots level for meeting challenges to Jammu and Kashmir. “We have to steer the state from the difficult times’ ‘, he added.
The convention was organised by Provincial President JKNC SC Cell Mr Vijay Lochan.