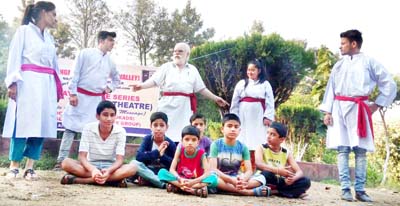 Excelsior Correspondent
JAMMU, May 28: Ek Sath Rang Mandal today presented it’s 301st Monday Theatre with Vijay Malla’s new progressive Nukad for the  students “Ess Baar Samaj Sudhhar” under “ Monday Theatre Series” at Paka Talab J.D.A. Park, near Rehari Chungi here.
This Nukad starts with signature Nukad Song “ Jago Bandu Jago Bahya”,.
The theme of the play is that “we should think positive, we should act positive we should behave positive and we must adopt positive attitude in our life style which will definitely improve our grace’’.
School going children are now off the classes for Summer vacations and they need some positive advise how to spend two months vacation.
They approached a well learned old person of their locality and sought his advise in this regard.
The old person told them that this vacation they should use for social  service in their locality.
He also frames a suitable Planning for two months that how they can best utilize their vacations.
He tells them that they can bifurcate their day in  three phases  one  for educating poor children, canvassing among all the parents not to permit their minor children drive any kind of vehicle which is fatal for them and  plantation for greenery around their locality.
Old man further advises them that in the morning they can make aware  those children about the value of education who don’t know about its value and arrange their classes. Afternoon they can canvass door to door by warning parents not to allow their children driving any vehicle. And in evening hours they can go for planting as much plants as they can so that they will enjoy Greenery in coming years.
The old man further told them that for all these reforms he will get then in touch with different N.G.Os who can help and plan their project.
All the children were happy with this planning and thanked to old man.
A large number of people enjoyed and appreciated the theme of Nukad.
Actors in the play were Inderjeet Singh Sambyal, Raju, Ashok Sharma, Shelly Manhas, Kavita, Shahid and Vijay Malla.
This Nukad was written and directed by Vijay Malla.