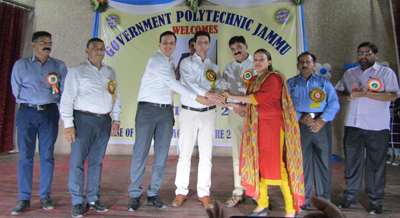 JAMMU, May 28: Government Polytechnic Jammu today organized a function to celebrate its Annual day. The occasion also witnessed the Prize distribution among the students with extra ordinary performance in exams and co-curricular activities.
Minister of State for Technical Education, Education, Tourism, Tribal Affair, R&B, Rural Development, Information, YSS, Revenue and Culture, Shakti Raj Parihar was the chief Guest.
The 3rd edition of the college Magazine ASPIRE was also released by the Minister.
Speaking at the function, the Minister congratulated the Principal, staff and students for releasing the College magazine and organizing the annual day function. He said that such activities will preserve and further enrich the rich heritage of the institute.
The Minister said Technical Education is vital for producing progressive human resource, which   substantially contribute to industrial growth. He   stressed on improving employability of the students and helping them to explore the avenues and create self- sustainable enterprises in the state.
On the occasion, the Minister also felicitated the meritorious students of the college.
Earlier, the function started with lighting of the ceremonial lamp by distinguished guests.
Principal of the College, Arun Bangotra, read the Annual report and highlighted the all-round achievements of the college during the year 2017-18.
He called upon the students to work with dedication and optimally utilize their skill to meet the challenges of the competitive world and achieve success in all their endeavours.
The Editors of Colleges Magazine ASPIRE Jasdeep Kour and Sanam Gupta were also awarded by the Minister.
A cultural bonanza was presented by the students depicting rich cultural heritage of the state. The cultural Programme started with a Ganesh Vandana by Palak and Mukesh. A Skit on “No short cut to Hard work” was presented by Nikhil and Group of Electrical Engineering Department. A Dogri Dance was presented by Pupinder Kaur and Group. Mehvish of Computer Engineering mesmerized the audience with her soulful voice by presenting a song. At last Ravjot and group enthralled the audience by Bhangra. Er Jasdeep Kaur, Lecturer I&C conducted the proceedings of the programme.
Vote of thanks was presented by Lecturer, Vandana Chib.
Others present were Vivek Mahajan Principal Government Polytechnic Ramban, Vivek Sharma, Principal Government Polytechnic Kathua, H.A Bhardwaj Principal Government Polytechnic Udhampur, Suket Gupta Principal, Govt Polytechnic Reasi, Rajinder Gupta Dy. Director, Technical Education, Rajesh Gupta Principal Women ITI Jammu and other officers of Technical Education department along with all HODs, staff and students of the college.