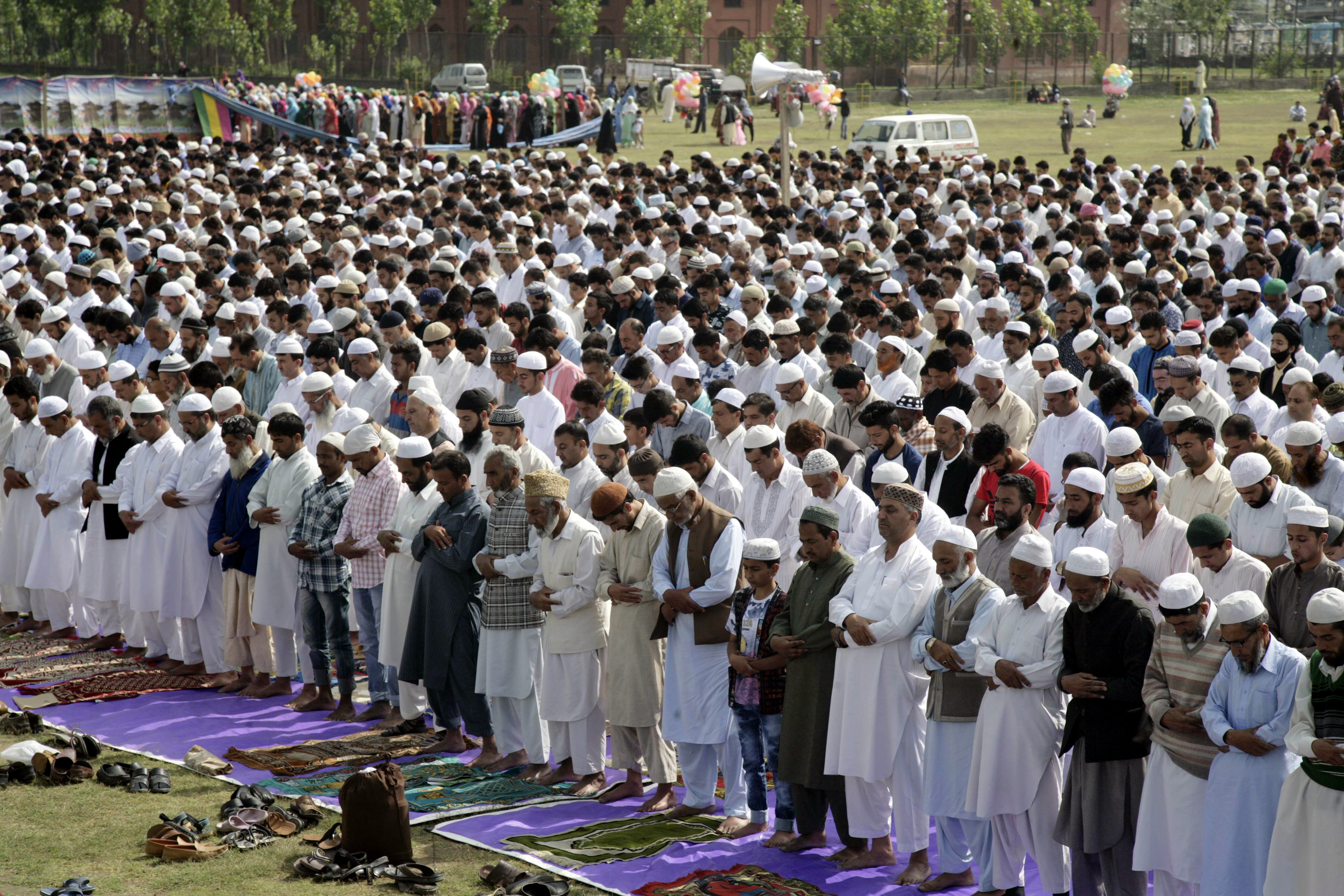 Excelsior Correspondent
SRINAGAR, June 16:  Eid-ul-Fitr was celebrated with religious fervor across Kashmir with people in thousands making it to Masjids to offer Eid prayers as a thanksgiving for the month-long fasting of Ramadhan.
The Eid prayers are held in open fields of Eidgah but due to overnight rains, it was offered inside Masjids. The biggest gathering was witnessed at Hazratbal shrine where thousands offered the prayers.
The second largest gathering was held at Eidgah in the old city.
Big gatherings of Eid prayers were also held in Sonwar and Soura shrines in the heart of the city. Similar gatherings were held at all districts headquarters and major towns of the Kashmir valley.
Chief Minister, Mehbooba Mufti, joined a large number of people to offer her Eid prayers at Ziyarat Hazrat Syed Sahib (R.A.), Sonwar, Srinagar.
After offering her prayers, Mehbooba interacted with the people and extended Eid greetings to them.
Later people in large numbers visited the Chief Minister at her residence and offered their Eid greetings. Thanking the visitors, she wished them well and hoped that this Eid brings along peace and prosperity to the State and its people.
Those who visited the Chief Minister included Ministers, legislators, public representatives, Government functionaries, prominent citizens, political workers and common people.
Earlier in the day, the Chief Minister visited Dara Shikoh Park at Bijbehara and offered Fateha to former Chief Minister, Mufti Mohammad Sayeed.
At Eidgah in Srinagar Hurriyat Conference chairman Mirwaiz Umar Farooq addressed Eid gathering after a gap of eight years as he wasn’t allowed by the authorities in the past.
Mirwaiz said Kashmir is a political and humanitarian issue and dealing with this issue with the military might can’t yield any result neither can it force the people of Kashmir or the leadership into a submission.
He urged Centre to revoke all black laws and release the prisoners so that a conducive atmosphere is created on ground for the resolution of vexed dispute wherein all three parties, India, Pakistan and the people of the State are involved in a process of engagement.
Mirwaiz said he is conveying the message of peace and prosperity to both Delhi and Islamabad on this Eid as people of Kashmir urge them to take concrete steps towards the resolution of Kashmir.
A Hurriyat Conference (G) spokesman said that Syed Ali Shah Geelani was prevented from heading towards the Eidgah for the prayers.
After Eid prayers people were seen visiting the near and dear ones for Eid greetings. Children were seen playing in parks and other places bursting fire crackers.