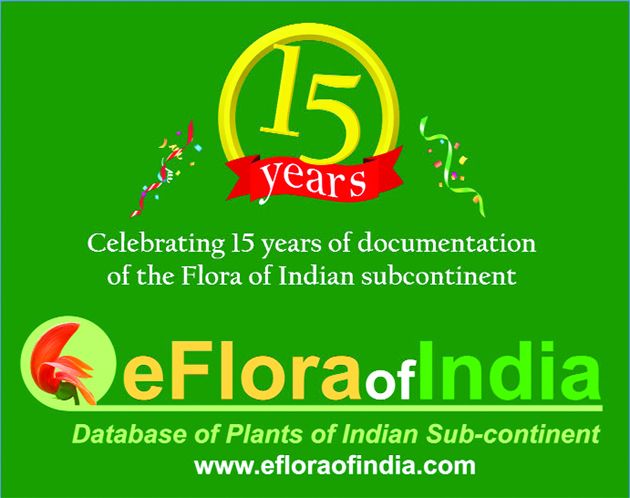 Gurcharan Singh, Nidhan Singh
eFloraofIndia, one of the biggest non-commercial websites, one of its kind in the world and without advertisements, celebrated its 15th Anniversary on 17th June, 2022. To celebrate this occasion, a special and first ever summit of this unique group was organized on June 19th, 2022. This group is based on the collection of photographic images of plants, where no money or professional organization is involved except for the selfless efforts of its members (and experts from all over the world) from diverse backgrounds. This group initially started as “Indiantreepix” in 2007 and the inspiration for the same was derived from the book “A Monk Who Sold His Ferrari”. This book inspired the founder Jag Mohan Garg (a Bird watcher and Nature Photographer) to do something for nature lovers, something unique and accessible to many. So he started the group, initially devoted to identification of trees only. Later on, with the joining of experts the canvas was expanded to include all sorts of plants, thus the group was renamed eFloraofIndia. Today this e-mail based Google group has more than 3300 members, a mix of trained taxonomists and non-botanist nature lovers. The members and experts discuss pictures contributed by different members and results are finally published on the website.
The group, as on its 15th Anniversary holds a collection of more than 4,00,000 images of more than 14,000 species (mostly from India). This is significant in light of the fact that around 18,000 species of plants are reported from India. The results are displayed on the website https://efloraofindia.com/ for everyone to see. More than 3,00,000 images have already been displayed at ‘species’ pages along with displaying these at genera & family pages for comparative purposes for easy identification. Along with this, pertinent links to relevant taxonomical literature and other resources have also been provided. For members of the group, it is not a project for few years, rather a continuous lifetime activity. Some of the members have dedicated their whole life for its building and improvement in different areas like photography, etymology, compiling names in local languages, coordination, supplying keys for easy identification and site building. What will amaze everyone that not a single penny has been collected from anybody in last 15 years, in building this biggest Citizen Science effort. Before this summit, not even a single offline or online meeting was ever held.
As a part of the celebrations of 15th Anniversary of eFI, a collaborative Wildlife and Nature Photography Exhibition was organized at Arya College, Panipat, Haryana. In this two-day event held on May 29 and 30, photographs of rare and beautiful plants were displayed, a large number of which were contributed by members of Efloraofindia. The event was a great success with students and plant lovers.
The members of the group have received recognition in various forms. The members who have contributed significantly are designated as ‘Moderators’, and help in taking important decisions. The Members of long-standing, committed and hard-working persons with high-level expertise are designated as ‘Pillars’. They are persons who have played critical roles in growth of the group. There is also a strong group of Subject/Area experts who have been providing expert advice and help in critical identifications. Three members to date have been especially recognised after rigorous discussions among moderators. The first one to get the title of ‘Pitamah of Efloraofindia’ in 2014 is Dr. Gurcharan Singh, who has contributed mainly from Jammu & Kashmir and played a major role in guiding the growth of the group. Saroj Kasaju, who joined the group in 2016, and contributed in a big way from Eastern Himalayas, mainly Nepal, was chosen for the title ‘Ajey’ of EfloraofIndia in February 2021. Dinesh Valke who has been with EfloraofIndia right from beginning and has impressed one and all through his excellent photography skills and specialises in compiling local Indian Names of Plants in Native Script, was chosen for the title of ‘Saarthi of EfloraofIndia in February 2022. Two more titles have been conferred during 15th Anniversary celebrations Summit meeting on June 19, 2022. The title “Jewel of eFloraofIndia” was given to Dr. Pankaj Kumar, a renowned Orchid Specialist, who handles largest family of flowering plants, Orchidaceae (nearly 26,000 species Worldwide). He is deeply involved with the group activities from the beginning, and he is honored for his excellent contributions to this forum throughout the years. Dr. Manoj Chandran, who has been helping a lot with identification of Grass species on this group is chosen for the title of “Grassman of EfloraofIndia”. It is worthwhile to mention that grasses are one of the most numerous flowering plants, that too with a complex floral morphology, which makes them very difficult to identify.
JM Garg, although not basically a botanist has always led the group from the front, may soon be crossing 1 lakh posts, has acquired a high level of proficiency in identifying plants and has been correcting many old identifications in recent months. In spite of all efforts by moderators he has resisted any title for himself, and perhaps he is beyond any formal title. The whole EfloraofIndia community and whole botanical fraternity and plant lovers would remain indebted to you for years to come.