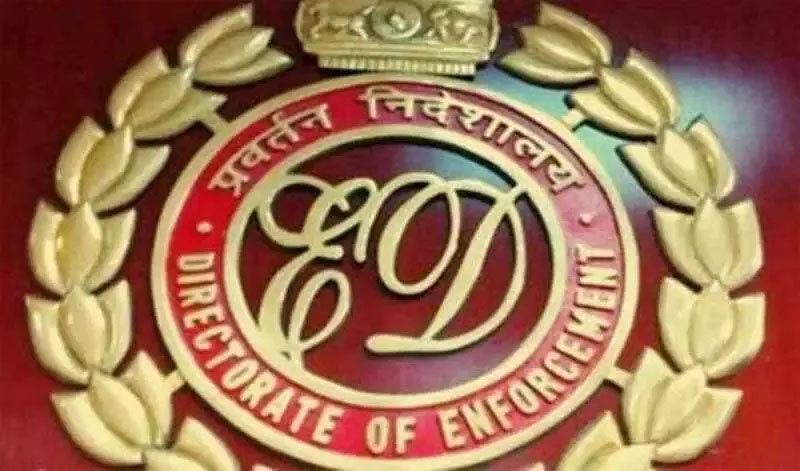 Amount siphoned off in connivance with JK Bank officials

JAMMU, Aug 1: The Enforcement Directorate raids on Gehlots of Rajasthan at seven premises associated with the Ambience Group which owns Leela Ambience Convention Hotel in Delhi and Ambience Mall of Gurugram, Haryana were based on a First Information Report (FIR) registered by the Anti-Corruption Bureau (ACB) Jammu against Aman Hospitality Private Limited, an Ambience Group Company in Rs 600 crore scam by siphoning off the loan from Jammu and Kashmir Bank.
The ED had conducted searches at the offices of Aman Hospitality Private Limited (AHPL), an Ambience Group Company, and residential premises of its Directors Raj Singh Gehlot, Dayanand Singh, Mohan Singh and their associates. It had seized Rs 16 lakh cash and foreign currency equivalent to around Rs 24 lakh during searches at the residence of Raj Singh Gehlot.
Official sources here told the Excelsior that the Anti-Corruption Bureau Jammu had registered a FIR against AHPL and its Directors in connection with alleged loan fraud in the construction of 5-Star Leela Ambience Convention Hotel at Surajmal Road in East Delhi. The case was registered on a complaint from J&K Bank, which was part of consortium of the banks that has granted the loan.
Sources said a huge part of loan amount of over Rs 600 crore for the hotel project was siphoned off by AHPL, Raj Singh Gehlot and his associates through a web of companies owned and controlled by them.
“A substantial part of loan amount was reportedly transferred by AHPL to several companies and individuals on the pretext of payment of running bills and advance for supply of material and work executed,” sources said, adding the employees of Ambience Group and the associates of Raj Singh Gehlot were made Directors/proprietors of these companies.
Gehlot was the authorized signatory in many of these companies.
Sources said no material was supplied and no work was executed and almost entire amount was immediately routed back to the entities owned by Raj Singh and sons (Hindu Undivided Family) and his brother’s son.
In August last year, the ACB Jammu had registered two cases against Management, officers/ officials of J&K Bank and Raj Singh Gehlot in JK Bank loan fraud worth about Rs 600 crores and conducted searches at some locations in New Delhi
The ACB registered cases against officials of the J&K Bank along with the illegal beneficiaries involved in financial irregularities/loan fraud worth Rs 600 crores and also conducted searches at residential premises and office of Raj Singh Gehlot at New Delhi.
Presently, according to sources, investigations in the case, were in advanced stage and are being conducted by a high level team of the ACB Jammu.
The ACB had registered cases on allegations of financial irregularities, wherein it was revealed that various loan facilities were extended to proprietors/ promoter Directors of firms namely M/S Aman Hospitality Pvt. Ltd and M/S Ambience Towers Pvt Ltd (both firms owned by Raj Singh Gehlot, Managing Director Ambience Group) during the period 2009 to 2016 in contravention to the laid down norms and procedures of the Bank.
During verifications, it came to fore that management at the Corporate Headquarters/ Zonal Office Delhi and other officials of J&K Bank Branch Ansal Plaza had extended loan worth crores of rupees to AHPL and in connivance with the firm, the loan amount was declared NPA to facilitate it to have one time settlement (OTS) to firm’s advantage.
The AHPL had submitted a “feasibility study and development strategy reports for the project” for setting up a twin 5 Star hotel in various banks including J&K Bank through its Branch i.e. B.U. Ansal Plaza New Delhi and cost of project was estimated as Rs 866.89 crores with further revised cost of the project amounting to Rs.1275.71 crores.
Out of the total project, AHPL had obtained a term loan amounting to Rs 227 crores (disbursed from year 2009 to 2013) besides Rs 15.00 crore as bank guarantee limit from J&K Bank Ltd Branch Ansal Plaza New Delhi whereas rest of the loan was availed by the firm from other banks. Since the company turned wilful defaulter as it failed to repay the loan amount on regular intervals, the J&K Bank sanctioned a funded interest term loan amount of Rs.47.21 crore in year 2014 in favour of the company.
Since the company again failed to pay the loan amount, resultantly the J&K Bank Authorities declared the loan account of the firm as NPA on June 30, 2018 and at this stage total outstanding of J&K Bank against the company was Rs 261.47 crores as principle amount and at the same time interest component Rs 27.81 as unapplied interest till April 30, 2019 and, thus, total outstanding with the company was pegged at Rs 289.28 crore.
However, surprisingly J&K Bank illegally and with malafide intentions settled loan amount for Rs128.94 crores only against the total outstanding amount of Rs 289.28 crore through OTS mechanism without taking recourse to SARFAESI Act in connivance with Raj Singh Gehlot, Dayanand Singh and Aman Gehlot, Promoter Directors of AHPL.
Due to connivance despite illegal OTS the authorities failed to recover a single penny from the company and OTS turned a mere eye wash and thus caused a monetary loss of Rs. 289.28 crore to Bank.