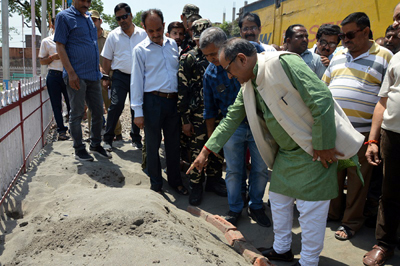 Excelsior Correspondent
KATHUA, Apr 28: Deputy Chief Minister, Dr Nirmal Singh held a meeting with the officers of PDD and Local Bodies Department to review their functioning at Basohli today.
Speaking on the occasion, the Deputy CM said that in the past 3 years capacity of PDD has been augmented from 10 MVA to 30 MVA and Rs. 30 crore have been sanctioned to revamp the power infra by strengthening the transmission and distribution network in Basohli.  He also stressed on ensuring that the projects being implemented in the power sector are completed within the stipulated time frame and asked the concerned officers to regularly monitor the works on grounds so that set targets are optimally achieved.
Dr. Singh also added that 18 new transformers will be installed in Basohli besides 18 KM of 11 KV distribution line and normal distribution lines will be laid so that people would get 24×7 quality power supply. For achieving this target, the Government has already given permission to install 2 receiving stations between Dhar Mahanpur and Karanwara besides up grading sub stations at Basohli, Mahanpur and Sheetal Nagar.
To meet the challenge of shortage of transformers in the ensuing summer season, DyCM suggested maintaining buffer stock of transformers at Basohli to cater any emergency at far off places. He also advised to establish Basohli-Bani-Billawar as new division to provide better facilities to the people living in remote areas.
Dy.CM exhorted upon the officers to conduct a survey among the students to know how many of them are left without IHHLs so that the statistics received after the survey can be put to use by constructing new IHHLs to realize the aim of ODF.
To revive the historical importance and to improve the aesthetic looks of various towns like Billawar, Nagri-Parole, Hiranagar, Samba, Basohli etc. which are governed by Local Bodies Department, DyCM directed the concerned officers to hire a consultant of national repute for complete makeover of these towns besides maintaining sanitation and hygiene.
Later, the DyCM took round of Basohli city and inspected various ongoing works including the toilet complex and directed the concerned officials to remove encroachment from the Bus Stand. He also enquired about the Solid Liquid Waste Treatment Plant.
Representatives from village Rehan, Mandla, Ghagrore, Madrakhi, Plahi, Plakh, Nagrota, Dhar Jankher and Jankher besides members of Beopar Mandal met with the DyCM and apprised him of their problems.
DyCM gave them a patient hearing and directed DC Kathua to immediately hand over the charge of Tehsildar Basohli to Tehsildar Mahanpur as the post of Tehsildar Basohli is lying vacant for some time causing inconvenience to the people.