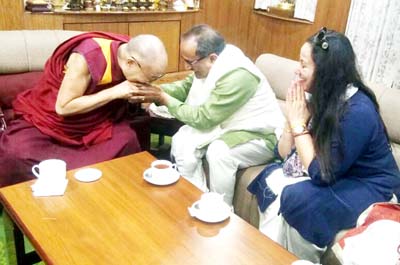 Excelsior Correspondent
JAMMU, Mar 30: Deputy Chief Minister Dr Nirmal Singh today called on 14th Dalai Lama at his residence in Mcleodganj, Dharamshala to seek his blessings for the welfare of the State.
He also informed the Dalai Lama about the works being undertaken by the Housing and Urban Development Department for the preservation of Buddhist heritage in Ladakh.
Later, he also paid obeisance at Mata Bajreshwari Temple, Kangra.